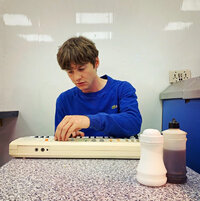 The Tap Room Side
1. I Don't Think I Love You Anymore
2. Buxton Palace Hotel
3. Film Night

Bright eyed, tousle-headed and with a look halfway between penitence and innocence, James Leesley (aka Studio Electrophonique) conjures a sound akin to the dream where Bill Ryder-Jones fronts The Velvet Underground with echoes of Cherry Ghost drifing in there for good measure. Cinematic, melodic, warm - efficient in arrangement yet intricate in detail.

My vision for Studio Electrophonique is to capture ideas as purely and as untouched as is possible.

James Leesley is Studio Electrophonique. Late at night he enters his home studio in Sheffield, England to write and record songs purely for the love of making words fit melodies and melodies fit chords, capturing them on his tape machine. These songs developed into the "Buxton Palace Hotel" album.

Using a simple tape machine facilitated my ideas. The songs were in 4-track form in my head, so it felt right just recording it as it was in my mind, in one or two takes.

James is the former singer, guitarist and main songwriter in a band formed at school with his friends. High Hazels were full of charm, promise and minor 7ths on sunburst guitars. Their talents earned them a record deal with Heist or Hit Records. An eponymous album, an EP and a handful of singles were met with crtical acclaim. By contrast James' solo project is more personal, sounding more revived, more assured, and in a sense, more himself.

Studio Electrophonique allows me a more introspective, vulnerable lyrical approach. The words don't have to introduce themselves to anyone before being in the song, so they could just be themselves. This has been the most natural and satisfying way of writing songs.

James writes and records late at night, keeping the noise down so not to disturb the neighbour's new-born baby, a factor which proved to be a catalyst to his fittingly gentle vocal delivery and measured playing style. James utilises just an old Guild Starfire, a Gibson B25, along with a Casio keyboard and a Philips Philicorda for accompaniment.

The songs he creates are simple and plaintive, beautiful and redolent, evoking feelings of calm reflection and so saying many of those things in song by night that we struggle to say in conversation by the light of day.

“I Don’t Think I Love You Anymore” is one of my own favourite songs. It’s the most romantic song I’ve done. I’m a hopeless romantic so naturally I try to find ways of hiding that emotion within the song, or at least enrobing it in some kind of ambiguity. Hence the title.

Studio Electrophonique return with the release of their second single, I Don't Think I Love You Anymore. This forthcoming single is a follow-up to their single Jayne and is set to be released on September 6, 2019.

Bright eyed, tousle-headed and with a look halfway between penitence and innocence, James Leesley (aka Studio Electrophonique) conjures a sound akin to the dream where Bill Ryder-Jones fronts The Velvet Underground with echoes of Cherry Ghost drifing in there for good measure. Cinematic, melodic, warm - efficient in arrangement yet intricate in detail.