Space is the Place (2 Viewers)

Weirdo. What will happen to that car does space preserve it ? Can radiation destroy it or something ?

hydromancer said:
Weirdo. What will happen to that car does space preserve it ? Can radiation destroy it or something ?
Click to expand...

It'll probably fall to bits, but he's gotten his global adverts sorted now and the military will be jerking off thinking about putting electric tanks on the moon soon enough for the first stage of the mining/survival wars.

y do u hate progress??

nooly said:
y do u hate progress??
Click to expand...

It won't get off my lawn, dammit.

Progress isn't the word I'd use for the bald monkeys deciding that burning 100s of tonnes of things in order to put, well, one carload of stuff on mars is progress. It's progress in the same sense that the combustion engine becoming a toy is 'progress' or building some stupid 10 lane highway is 'progress'. Anyone who thinks living on mars is cool should just fuck off to Antarctic which is a welcoming warmer version of mars without the -150 degree winter. His interjection in the earth based car market has been good but this power obsessed commercialisation of burning stuff to leave our habitat is really stupid. It also opens the horror show of mars being colonised by a bunch of silicon valley tech bros who think they are christopher columbus. Progress is word we shouldn't apply to everything with new toys in it.

I find it impossible to be enthuiastic about Elon Musk
Is everybody really fooled by his bullshit?

this is a good piece

Lili Marlene said:
this is a good piece


(of course Sam Kriss who wrote it is now an unperson so there's that)
Click to expand...

"Not only is Musk is draining the public purse, but he’s making use of technologies that already exist: the impetus for their development isn’t coming from the mysterious deeps of his unique and inscrutable intellect. Dozens of other companies, after all, get government contracts for space flight, electric cars, or renewable energy. All Elon Musk has done is seek out the maximum potential market share in a narrow band of state contracts, and then present his profit-seeking as a grand futuristic vision."

This, exactly this.
It's like the fucker invented electricity or something.
I see noting in anything he's don'e except good engineeting and salesmanship - what's he invented?

I'm a Shingy man til the day I die! Fuck the splitters! Stay true! 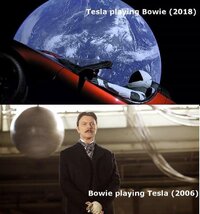 Falcon Heavy's 3rd contract/launch is for an american military satellite.

Trump wants to privatize the ISS in 7 years time.

Space X aren't 100% perusing heavy as a mars mission in the same way they were when they wanted press.

Its a truck except it burns kerosene and liquid oxygen.

Also the tech isn't too far off all the other ones (US ones, russion things), its just a bit cheaper for the reusable version - you can hire a disposable one for extra. (150M dollars)

Your no craic researcher.