Lili Marlene said:
I was surprised how out of touch Branson was when he pulled out the "haters don't realize this is inspiring" line, a very end of history take on it all. My dad liked it though, was texting the family live updates as it happened.

Bezos just wants humans to get out of his fucking way. My dad didn't notice this one.

Musk is a redditor, THE redditor, so he'll just be meming away up there when he does it. My dad wouldn't be impressed with that, he'll quite rightly call Musk a fool.
Click to expand...

I was looking at a thing about tesla's (engineering explained) and the TLDW was that because they built infrastructure they are still winning at electric cars. Musk is going the same way with the exploders with the upcycled tin can bit to distract from the enough fuel for *200 years driving bit. Bezos, being characterised by amazon is probably just wondering when he can somehow 'disrupt space travel' by somehow getting his mits on the exploders and cornering the market. He's not as interested in making a system - denoted by how his one is basically a taxi at best, while musks one is a truck/bus/ship type design. And yes bransons one is a yacht for going looking at nice things ... again bezos probably evil masterminding how to become a middleman here.


*i cant remember was it 2 years or 200 years fuel per explosion.

Well Tesla is a ponzi scheme while Amazon is, yes, evil, but does do what it says it does so there's that.

Sorry, I say ponzi scheme but I really just mean scam, and a successful one at that so yeah, I'm still waiting on my Musk satellite dialup here.

Sometimes it is difficult to write objectively about the rate at which SpaceX makes progress. The advancements we're seeing at the company's Starbase site in South Texas are unprecedented.

On Sunday, SpaceX finished stacking what it is calling "Booster 4," the first of its Super Heavy rocket boosters expected to take flight. This is a massive, single-core rocket that is approximately 70 meters tall, with a diameter of 9 meters. It has a thrust approximately double that of the Saturn V rocket that launched NASA astronauts to the Moon.

Then, overnight, something remarkable happened. Technicians and engineers at the SpaceX build facility near Boca Chica Beach attached 29 Raptor rocket engines to the rocket. Twenty-nine engines. Each with intricate plumbing lines and connections. This is the number of engines that Super Heavy will fly with for initial flight tests, although the final configuration is likely to have 33 engines.

I'm not really sure what to write or say about all this, because typically in the rocket business it takes a few days to install a single engine.
Click to expand... 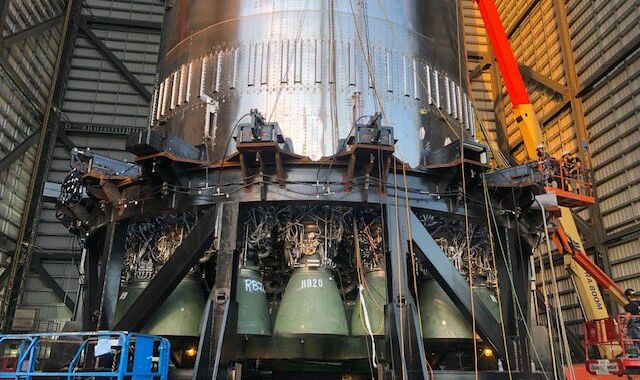 I'm mortified for them all.

I'm a big rich earth man so I can has space now yay.
Climate crises and the poors ?! No me go space more important!

Elon Musk's company? I have the answer right here: they didn't do it, they're lying.

Lili Marlene said:
Elon Musk's company? I have the answer right here: they didn't do it, they're lying.
Click to expand...

The theory is that they “attached” them, as in bolted them in place to make sure it all fits(?) onto the new launch platform they just built, but didn’t “attach” them to fuel lines or any of the hard stuff needed to make them work.

pete said:
The theory is that they “attached” them, as in bolted them in place to make sure it all fits(?) onto the new launch platform they just built, but didn’t “attach” them to fuel lines or any of the hard stuff needed to make them work.
Click to expand...

That sounds about right.

The whole second half of that article is basically 'they are doing this to bully the environment'.

there they are now

i like how they have a person beside it for scale

that, my friends, is what's known in the business as a big fuckin crane

Hi-tech method for fine crane adjustment: Get a bunch of lads with big straps attached to it to pull as hard as they can

it's all looking a bit Salvage 1