Should Grown Men Use Emoji? (1 Viewer)

The answer is 'no', no matter what the NY Times says

Should Grown Men Use Emoji? 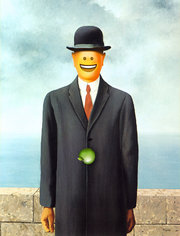 Continue reading the main storyShare This Page
A specter is haunting our communications: the specter of emoji. Right now, it’s likely that someone you know is texting a thumbs-up image to confirm a meeting, or maybe sending off a friendly ghost emoji to say “boo” to a friend.

Yet the little guys (and gals, and farm animals, and foodstuffs) aren’t without controversy. Word-centric fuddy-duddies see the decline of literacy reflected in their heart-shaped eyes, while guardians of decorum lament the spread of greasy kid stuff dripping from the characters’ snail trails.

Given their resemblance to the stickers that adorn the notebooks of schoolgirls, not to mention their widespread adoption as the lingua franca of tweens and teens everywhere, some people wonder whether grown men should be using them at all.

John McWhorter, a linguist who teaches at Columbia University, said that some men shy away from emoji because, as he put it, “Women use them more.” That may not continue to be the case, he added.

“Women tend to be more overtly expressive in language,” he said. “But something women start in language has a way of making it to men. Men would benefit from using emoji more.”

Emoji, he said, allow for an expressive, human way of translating the spoken word into text, with the goofy symbols providing a texter or tweeter with the means to convey tone. “There should be male ways to use emoji,” he added.

While Mr. McWhorter, 49, does not use emoji himself, citing his age, he is an admirer . “I’m not known as the most progressive person in the world, but in some ways I like them,” he said. “I’m a big fan.”

Other experts (that is, emoji users themselves) are less definitive. “It’s a fine line,” said Melissa Karlin, 35, a Chicago-based accounts manager for Kenshoo, a software company. “Emoji-ing is a dance.”

She noted that some men use emoji in ways she finds inscrutable, particularly in the context of romance, when they are given to texting the symbol of the winky face with the tongue sticking out. “I don’t know what it means,” Ms. Karlin said.

She offered a piece of advice for potential suitors: “Use your words. I’m a big fan of using your words.”

In a discussion that appeared last year on Yahoo Answers, one anonymous poster said of emoji: “They’re fun but I just find them emasculating!” In a spirited thread on the same topic over on Reddit, another emoji user counseled, “Like anything else, moderation is key.”

And yet many men find themselves grasping for emoji where words either fail them or come up short (prawn, perhaps).

The tennis star Roger Federer sprinkles his tweets with them, and Mike Scott, a 6-foot-8 forward with the Atlanta Hawks, has several emoji tattoos, including the pair of dancing girls with bunny ears. The rapper Drake blew up the Internet last fall when a photograph of a praying-hands emoji tattoo, inked onto his right forearm, surfaced on Instagram.

Jordan Peele, of the sketch comedy duo Key & Peele, proved his fluency when he retold the story of “The Shining” through 96 carefully selected emoji packed into a single tweet, an effort that has won him more than 13,000 retweets.

Certain men embrace emoji while holding them at a remove. Gil Schwartz, a CBS executive who writes under the name Stanley Bing, called himself a “rare user of ironic emojis.” He said he is partial to the pig and the horse. “I use them because I think they’re stupid,” he said. “At some point, texting is kind of stupid.”

He has no fear that using them may somehow put a dent in his masculinity. “For a moment you’re Taylor Swift,” said Mr. Schwartz, who is 63. “If you’re confident in your manhood, you can certainly lapse into Taylor Swift-hood momentarily.”

Amina Akhtar, the editorial director of TheFashionSpot, a website, isn’t buying it. “If I’m seeing a guy, and he emojis, I feel uncomfortable,” said Ms. Akhtar, 37. “We’re too old to be doing this. To have a man in his 40s and 50s using emojis is uncomfortable to me.”

Katey Nilan, a 29-year-old writer and tech consultant in San Francisco, said: “If Drake can emoji, anyone can emoji. He’s pretty hard.” She added that, while she is pro emoji , there are limits . Like Ms. Karlin, she finds the winky face tongue-wagging emoji troublesome, especially when it is sent by men trying to flirt. “It seems like that’s the go-to if a guy can’t come up with something else to say,” Ms. Nilan said.

What does she do after she receives that one?

Meaning, she replies with the ghost emoji?

Stephen Lynch, a 33-year-old public relations professional in San Francisco, holds that emoji are neither good nor bad in themselves. “People can be as creepy using emoji as anything else,” he said. “Some people have troubled communication no matter what.”

To him, furthermore, the question of whether grown men should use emoji is loaded. “The whole ‘should’ reeks of an old-fashioned and hetero-normative view of the world,” he said. “Second thing is, why wouldn’t they reciprocate?”

In other words, if someone sends you an emoji, why not reply in kind? “Why wouldn’t you engage in the same way someone is engaging you?” Mr. Lynch said.

Bruce Feirstein, a screenwriter and journalist living in Los Angeles, seems to agree: “When my 14-year-old son sends me the face palm emoji, I laugh. I immediately respond. But that’s a conversation with my 14-year-old son.”

His business correspondence, on the other hand, has a tone that doesn’t allow for a smiley face, or even the mustache man. “It’s all about context,” he said. “I’ve never gotten a serious piece of communication or a message from an adult with an emoji.”

Mr. Feirstein, 61, is something of an authority on the subject of what men should or should not do, having written the 1982 best seller “Real Men Don’t Eat Quiche,” a satirical “Guidebook to All That Is Truly Masculine,” as the subtitle put it.

“When I wrote the book, things were simpler than they are now,” he said. “I don’t know if, in the year 2015, defining what a ‘real man’ would do or not do is relevant, because the culture has changed. I don’t know if you can make these grand pronouncements anymore.”

Besides, grand pronouncements are likely to have no effect on how language is changing in the digital sphere. “I say it’s like a new form of communication,” said Adrian Rodriguez, a 26-year-old office manager in San Francisco. “It’s just the way things are evolving. It’s just there. You don’t want to overthink it.”

A version of this article appears in print on April 3, 2015, on page D27 of the New York edition with the headline: Wipe That Smile Off Your Texts.

Depends on the person you're texting no? I had a quick scan of my whatsapp and any time I've used them it's been in conversation with a female (but not with all females) so I guess as someone in the article says it's just recriprocating. Once every sentence isn't littered with them it's no harm and I say that as someone who is very particular about grammar and spelling even when text messaging. I particularly like the sun

Whatever the hell it's supposed to mean.

this is a stupid article by the way

Theodore Kaczynski said:
Depends on the person you're texting no? I had a quick scan of my whatsapp and any time I've used them it's been in conversation with a female (but not with all females) so I guess as someone in the article says it's just recriprocating. Once every sentence isn't littered with them it's no harm and I say that as someone who is very particular about grammar and spelling even when text messaging. I particularly like the sun

Whatever the hell it's supposed to mean.
Click to expand...

You should be able to hover your cursor over them and they say what they mean.
But yeah, context is important. They are allowable when dealing with children and some women.

I have no idea

I'd never use them only I found people can't tell what sarcasm is unless you drop the odd one in.

hydromancer said:
This emoji represents the return to a state of nonverbal and presymbolic languagelessness it is an escape route from bogus constructs and unture artifices the attempted impositions of erroneous stratagems that lead only to state's of dissimulation
Click to expand...

ann post said:
I'd never use them only I found people can't tell what sarcasm is unless you drop the odd one in.

i don't know what that one means

My Name Is Prince.

I really miss the old Skype emoji, they were way funnier. I was able to recount the story of the battle of the 40ft* using just the dancing man, the ninja, the smug looking sun, muscular arm and beer emoji. It doesn't look the same with the new ones

*a 40 man battle a couple of years back on the beach in Sandycove.

Click on any of them to see the tweets, and you'll see how insane Twitter really is!

Jim Daniels said:
Emoji use in real time on Twitter..

Stand Up Comedy is dead