Delighted to welcome back to Dublin first wave Northern Ireland Punk band Protex to play an intimate show in The Underground Venue Dublin.
Special guests on the night The LEE Harveys & Bar Tape

In the late Seventies, Belfast produced some of the best and most enduring punk records. Bandwise, Stiff Little Fingers and the Undertones were destined to have the biggest impact on the mainstream, but just as important were bands like Rudi and The Outcasts who, alongside the Undertones, got their first break on the legendary Good Vibrations label. Following fast on their heels were a band of school kids known as Protex, whose debut single ‘Don’t Ring Me Up’ appeared at the end of 1978 and is rightly considered to be one of the classics of that era. 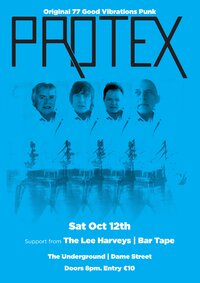