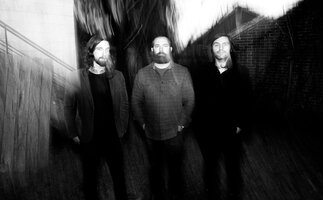 Russian Circles named their 2016 album Guidance in reference to the uncertainty of the future. It was a fitting title for the times, with the album coming out a few months before America’s tumultuous presidential election, but it was intended more as a reference to the band’s own absence of a blueprint as they navigated their second decade as a band than as a social commentary. If there were questions as to how to move forward as a musical unit or individual doubts as to how to continue toiling as artists in the underground, the three years of relentless touring on the album only served to reinforce the Sisyphean struggle of artists. With their latest album Blood Year, Russian Circles forsake the sonic crossroads of divergent musical paths found on albums like Guidance and Memorial to offer up the most direct and forceful collection of songs in their discography.

The Chicago trio have always explored the dynamics of volume and timbre, with their albums vascilating between caustic attacks and blissful respites. Blood Year begins with the calm before the storm in “Hunter Moon”, where a few narcotic repetitions of guitarist Mike Sullivan’s melancholic plucked chords and woozy slide guitar usher in the first assault. “Arluck” charges out of the reverberating sustain of somber drones with Dave Turncrantz’s pounding rack and floor toms, expertly captured by Kurt Ballou at Electrical Audio in Chicago. The studio’s reputation for pristine drum tones is on full display in those opening bars, and when the drums break and Brian Cook’s grinding bass line forces its way into the mix it becomes evident as to why the band returned to Steve Albini’s world-famous recording studio where they’d tracked Enter, Geneva, and Memorial. Sullivan dives into the song with his signature finger-tapped leads and stacks loops of idiosyncratic harmonies on top of it. The song barrels through bottom heavy chugged guitar patterns and tightly wound noise-rock riffage before the rhythm section drops out to leave a lone guitar line in the ether. A second guitar line comes in on top of it. Then a third. The chasm fills with an orchestra of guitar loops before the drums and bass come back in and build to the song’s vicious conclusion.

With Sullivan, Turncrantz, and Cook all residing in different states, Russian Circles have typically crafted their albums by piecing together song fragments and home recordings into meticulous texture-rich studio productions. But after seven tours in North American and five trips to Europe in support of Guidance, the band made a conscious effort to approach the songs on Blood Year with the same organic feel of a live show. In an age where rock records are often built on a computerised grid, Russian Circles chose to track the foundations of the songs together in one room as complete takes without click tracks. The human pulse and unmetered energy is immediately obvious in the dissonant barrage of “Milano”. The no-frills wall of distortion and mid-tempo stomp of the song recalls some of Russian Circles’ most unrelentingly savage moments—Memorial’s “Burial”, Geneva’s title track, Empros’ “309”. The first half of Blood Year closes with “Kohokia”, a harrowing song that somehow manages to capture the unsettling negative space of Spiderland in one moment, the blurry clamor of ashen metal in the next, and ultimately arriving at a triumphant pinnacle of staccato bass chords, battering ram drums, and heroic tapped guitar leads.

Side two begins with one of the few reserved moments on the album in the slow fever-dream loop-stacked baritone guitar lines provided by Cook on “Ghost on High”. It’s less a song than a prelude to the tremolo-picked battle anthem “Sinaia”. Guitar overdubs were done at Ballou’s God City studio, and the engineer’s gift for rendering a variety of exquisite distorted tones can be heard in the timbre-rich medley of pastoral drones in the introduction, fury-of-Valhalla tremolo picking in the verses, scathing black metal-tinged snarl in the bridge, and cataclysmic chords in the finale. Russian Circles albums have typically ended with a comedown—the pensive “Xavii”, the folk ballads of “Praise Be Man” and “Memorial”, the delay-soaked ambience of “Philos”—but Blood Year ends on its most vengeful note, with the barbaric battery of “Quartered”.

If Guidance was meant to be an exploration of forking paths, Blood Year is an almost single-minded statement of authority. While it retains the dexterity, multi-faceted techniques, and dramatic compositions that have been a trademark of Russian Circles since day one, Blood Year fully embraces the most forceful aspects of the band’s repertoire.

Support from
* No Spill Blood
+ A.A. Williams
Click to expand...

With further European tour dates to be announced soon.

With the steady reveal of their forthcoming album Blood Year, Russian Circles continue to remind the world why they have reigned as one of post-rock’s most stalwart forces. Their latest single, “Kohokia,” finds the trio in one of their most exploratory modes, capturing Slint-esque negative space in one moment, and blizzards of ashen metal in the next.


“Kohokia” is the final glimpse into Russian Circles' forthcoming Blood Year, due out in just a few weeks. Serving as a reminder of their dominion over the metal and rock worlds, Blood Year retains the dexterity, technique, and drama that Russian Circles have become synonymous with, fully embracing the most forceful facets of the trio’s repertoire.

Blood Year will be released via Sargent House on August 2 and Russian Circles will be on tour in the UK and Ireland this summer (dates and details below) with a full European tour still to be announced later in the year.