So, there is now only one team in Scotland.

This could put them in real danger of being relega . . . I mean finishing in thir . . .

If your club gets wound up by administrators, you don't finish anywhere

Can't see them being wound up.

Some nervous rangers fans out there,apparently hmrc are sick to death of football clubs avoiding their taxes and debts and are looking to make an example of a 'big' club.

Theodore Kaczynski said:
Some nervous rangers fans out there,apparently hmrc are sick to death of football clubs avoiding their taxes and debts and are looking to make an example of a 'big' club.
Click to expand...

Made all the more funny by the fact that Rangers fans will not shut up about the fucking Queen and royalty and all that shit.
Gas stuff really.

Indeed,they come out with some nonsense. 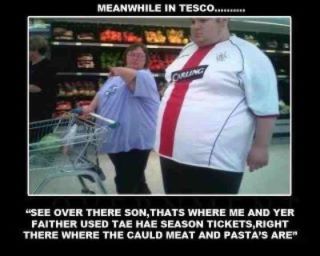 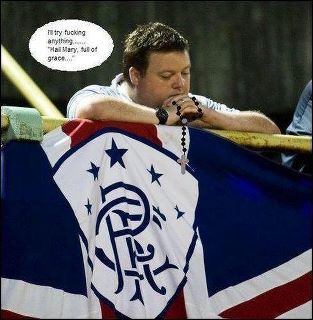 oh shit said:
If your club gets wound up by administrators, you don't finish anywhere
Click to expand...

Awful rare for a club to get wound up though, you've read Why Engand Lose/Soccernomics yeah? Section on it in that.

They won't get wound up - the SFA or someone will step in for them and do some behind the scenes deal (aka masonic handshake) that will result in them not having to pay most of the huge tax bill that hasn't even gone through the courts yet. That's my prediction. I bet the cheating cunts are back buying players next year and all.

Surely Celtic would have to bite the bullet and join the english league if Rangers did get wound up.

Hypothetically they surely couldn't attract any decent players to a league with one team in it.

Both Celtic and Rangers would play in the Prem in a hot snot. They won't be let in.

The argument that I've heard is that they couldn't join the premier league it would only be fair that they'd start off in the championship at least. I was trying to think of any teams that play accross a border, I skipped over Swansea and Cardiff about 3 times. Anyone else ? Monaco technically I suppose.

they will join the PL if the PL deems it a profitable move, and probably not under any other circumstance.

washingcattle said:
The argument that I've heard is that they couldn't join the premier league it would only be fair that they'd start off in the championship at least. I was trying to think of any teams that play accross a border, I skipped over Swansea and Cardiff about 3 times. Anyone else ? Monaco technically I suppose.
Click to expand...

washingcattle said:
The argument that I've heard is that they couldn't join the premier league it would only be fair that they'd start off in the championship at least. I was trying to think of any teams that play accross a border, I skipped over Swansea and Cardiff about 3 times. Anyone else ? Monaco technically I suppose.
Click to expand...

I think there's a lower Scottish league team that are actually from South of the border, FC Vaduz are from Liechtenstein but play in the Swiss second division. Also, depends on your views re: Basque/Catalan nationalism.

Celtic have managed their finances well over the past 10 years or so, and are not reliant on TV money; no team in Scotland can be. Celtic's money comes primarily from the fans at this stage.
Rangers going bust means they might lose some attendance money in the long run - but this is negligible, as most league and cup games against other Scottish teams already have smaller attendances which don't seem to be getting any smaller than they are right now, so the only money they are really losing is the 2 or 3 home games against Rangers every season.
Add to this that they will get all the league prize money, and have a slightly better shot at getting into the Champions League every season, and these factors probably tend to weigh each other out more than anything.

The 'join the English league' debate has been down to death, and frankly only the complete hacks that write nonsense about the Old Firm week in week out are mentioning it any more. It's not going to happen, and not just because the Premiership wouldn't want it - Celtic would have no reason to want to join a league where they would probably end up struggling every season.

Celtic's primary long-term goal over the last 5 years or so at least has been to put more effort into developing youth players, and attempt to build a sustainable squad that can compete in Europe. Whilst this may be a very difficult thing to do, the idea is financially sound and will not get them into money trouble. They might have a little more difficulty in attracting players (compared to what though? Wouldn't every player rather play in the Premiership as it is?) , but a big part of the whole idea is to try and bring through a better standard of player from their youth team, like James Forrest and this lad Dylan McGeouch look to be.
Basically, Celtic are trying to adapt a Barcelona style model of team building, to bring out a better class of young Scottish player.
They have accepted that they can't compete much in Europe as things are, and they can't compete in terms of cash to buy players that could be competitive there, so the only solution is to try and create something a bit different.

All the hyperbole being thrown about right now about Celtic being in trouble just because Rangers are a bunch of cheats, and Celtic joining the English league - it's all a load of nonsense, and almost all of it is written by shit hack 'journalists' that have realised their jobs are about to be downgraded now that Rangers won't be about to feed them bullshit stories to sensationalize on the back of a rag newspaper. Celtic stopped talking to these fucking hacks years ago, and it is panic stations for them now too, because with no stories being fed to them by Rangers, they are all fucked as well - hence this weak attempt to attach themselves to Celtic in some way in the hope that some event will come along that will save their jobs.

Rangers going bust is fucking great, because not only does it mean Rangers are fucked, it means the Scottish football press is fucked, and the Scottish referees association are going to lose out on a load of fucking cash too!

Celtic are grand. They were in the shit in the early 90s and thanks to Fergus McCann and some others they got their house in order. They were literally minutes away from going up the shitter though. I remember it well. Jack McGinn was chairman, his family had controlled Celtic for around 60 years and he was a bit of a dope (but not a bad bloke really). Just not so financially savvy. He went and spent shit-loads on some waste land and had these pie-in-the-sky ideas about building a new stadium even though Celtic were broke (remember Cambuslang?). McCann came in and saved the day but jaysus did he leave it late. So, yes, Celtic have their house in order, but its because they had the shits put up them 20 years ago and learned their lesson.

If Rangers go to the wall Celtic will suffer. Their gate will dwindle. The league will slip in European terms, meaning less spots for European competitions, etc. Plus Scotland in general will be fucked as the standards are bound to slip. Celtic and Rangers keep each other on their toes. They keep each other's fans' interests peaked. Its really not like a situation in England where rivalry can extend beyond a single city. Hearts and Hibs are gone to hell so it'd be pointless wasting energy hating on them. Celtic, unless they can get into an English league (which I personally hope doesn't happen for fear they'll turn into Wolves), could do with Rangers sorting their shit out.
New posts

Getting in to gigs when you're underage
2 3