this is possibly better suited to Lifestyle or General than Politics, but anyway.


A Report said:
A report has found people of African descent in Ireland suffer frequent racist abuse including violence, harassment and discrimination by public institutions.

It found that black men and women are persistently shouted at in public, asked to leave public spaces or services, and are accused of benefit fraud.

Young women in particular are victims of stalking and harassment in public places, while harassment of black families in their neighbourhoods is also extensive.

The anti-racism watchdog found that black and African people are often reluctant to call attention to the victimisation in case it caused further problems.

It also revealed that witnesses to racist incidents feel frustrated and scared during the attacks and are often afraid to intervene in case it aggravates the situation.

The lead researcher on the report has said people from the black African community suffer pervasive everyday racism.

Dr Michael said it can arise in areas such as social welfare, policing and with local authorities. She added that samples in the area were small, but the types of problems are persistent.

She said "it's demonstrated in people not being given the service, being told that if they're not happy with the service they are receiving they should 'go home'. That's persistent.

"Gardaí refusing to accept or record racism as part of reports that are given to them or being late to the scene of incidences, allowing perpetrators to walk away from the scenes while they talk to the victims, very often focusing the attention on the victim rather than on the perpetrator."
Click to expand...

are people surprised by this? Or the extent of it, even?

Maybe in my privileged little world I'm kind of insulated and/or oblivious to a lot of what goes on. About 70% of the people I work with locally aren't from Ireland. About 30% aren't from Europe. Of those, most wouldn't be 'white'. I'd hate to think they have to put up with shite like whats in that report.

Ireland is some scumhole really, isn't it.

The one thing I am surprised about in the report is that it refers only to 'people of African descent'. Surely this problem extends way beyond this?

scutter said:
The one thing I am surprised about in the report is that it refers only to 'people of African descent'. Surely this problem extends way beyond this?
Click to expand...

People of African descent includes way more racial and ethnic varieties than just Black people too, so it's really not very a helpful term.

Everyone gets treated like shit in this crapshack. Believe me, African friends, that the Garda aren't interested in your stories has nothing to do with your colour. They ain't interested in mine, and I speak right proper too. And women of all hues get harassed in public. And the dole are pricks, full stop. Maybe the difficulty is just getting along on Craggy Island. It's hard.

Anyway, I haven't seen much racist abuse, but I have seen some. Not recently. What would you do, if you were on the bus and some scummer started racial abusing a black person? I've seen it happen. I did nothing. The bus driver went mental on this eejit. I like to think that nowadays (it happened a long time ago) I'd step up and intervene. Because, you know, fuck that shit.

I also tend to confuse Dublin with Ireland. I've no idea what goes on outside the pale. But sure, we voted for the gays to marry their toasters so we can't be that bad, can we?

Based on my straight up racist relations, no I am not surprised.

The argument is usually along the lines of "Sure, what else can they do, we treat them like crap so of course they all turn to crime. You'd do the same too if you were an immigrant."

My Gran lived in London for fifty years. She's a bit racist. But that's London's fault.

old people are a different kind of racist tho

they'd use an inappropriate term to describe one's ethnicity in the same way as they'd refer to an obese person as the 'fat man/woman over there'.

scutter said:
Ireland is some scumhole really, isn't it.
Click to expand...

I think it can be a very tough place to be different, in angry regard.

But it's also the country of this, so it evens out 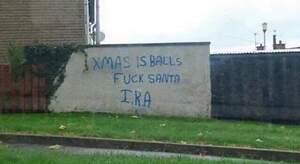 Best graffiti of all time.

You won't see any of African decent homeless in Ireland . This privilege is reserved for the Irish . This is certainly one reason that many in such a position turn to hatred .

rgossip said:
You won't see any of African decent homeless in Ireland . This privilege is reserved for the Irish . This is certainly one reason that many in such a position turn to hatred .
Click to expand...

rgossip said:
You won't see any of African decent homeless in Ireland . This privilege is reserved for the Irish . This is certainly one reason that many in such a position turn to hatred .
Click to expand...

I saw a black fella begging a couple of weeks ago.

So your hypothesis is flawed

homelessness is a right, not a privilege

GO said:
I saw a black fella begging a couple of weeks ago.

when did Dara O'Briain turn into such a massive cunt?

thought of putting this in celebrity creeps, but figured it might be more appropriate here.

racist apologist = racist, in my book

I can't actually understand Danny Baker's explanation of why it wasn't meant to be racist:

If Boris Johnson had a kid yesterday, it would have been the monkey in the top hat, because it was a thing about class and privilege.

What does he mean? Monkeys are not privileged?

He's coming at it like it's a PG Tips ad. It's probably gone over his head that those ads, while ostensibly sending up the upper classes as absurd, were always derived from racist coding.

I don't believe he's racist, but he is showing profound ignorance in everything he's said since, and the difference is all much of a muchness to many people of colour.

The thing is, if he'd just said 'You know what? I fucked up. I see why it's offensive, I was oblivious to it when I did it, and I'm sorry for posting it', I think we'd already have moved on. He'd still be out of his job, but them's the breaks in such public-facing but well-remunerated gigs. Instead, he was more concerned with being personally offended that anyone would think him a racist, rather than taking ownership of the thing that he did.
New posts