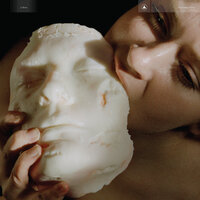 Pharmakon shares a brand new video entitled Devour today via Nowness, which is a collaboration between Margaret Chardiet, filmmaker Jacqueline Castel and multimedia artist Caroline Schub. Read a statement by the filmakers below.

Devour marks a collaboration and working collage between three artists from different disciplines, anchored by the themes of self-cannibalization present within Pharmakon’s latest recording of the same name.

The intimate, rigorous series of shoots for this project formed a ritual for our summer together, informed by Musician and Performer Chardiet’s soundscapes which echo the stages of grief associated with the cyclical chamber of self-destruction amidst the chaos of the external world. This conceptually formed the backbone for the video, an exploration of the act of devouring oneself as an attempt to balance the agony of existence.

Multimedia Artist Schub created the still lifes cast from Margaret’s body (present on Devour’s album artwork), along with contributing a model of her torso, used for a gruelling series of takes where she consumed her own body cast from gelatin. Her flesh became our collective canvas, an extension of Schub’s own personal work of physical self-documentation, a form of self-preservation after years of chronic illness. This was contrasted with performances by fellow artists and friends Micki Pellerano, and Sigrid Lauren & Monica Mirabile of performance collective flucT.

Once shot, the video was processed through a series of VHS dubs done by hand by Filmmaker Castel, a methodical act of degeneration akin to the creation of a photocopy, a slow deterioration of the work imbued within the medium itself. The edit was then approached as a conceptual video zine, a surrealist cut up of dissociative, abstracted figures clashing against static, unidentifiable flesh, and visceral moments of performance to once again echo the narrative of a body in crisis.

The fourth full-length record from New York City based artist Margaret Chardiet’s project Pharmakon is out now via Sacred Bones.