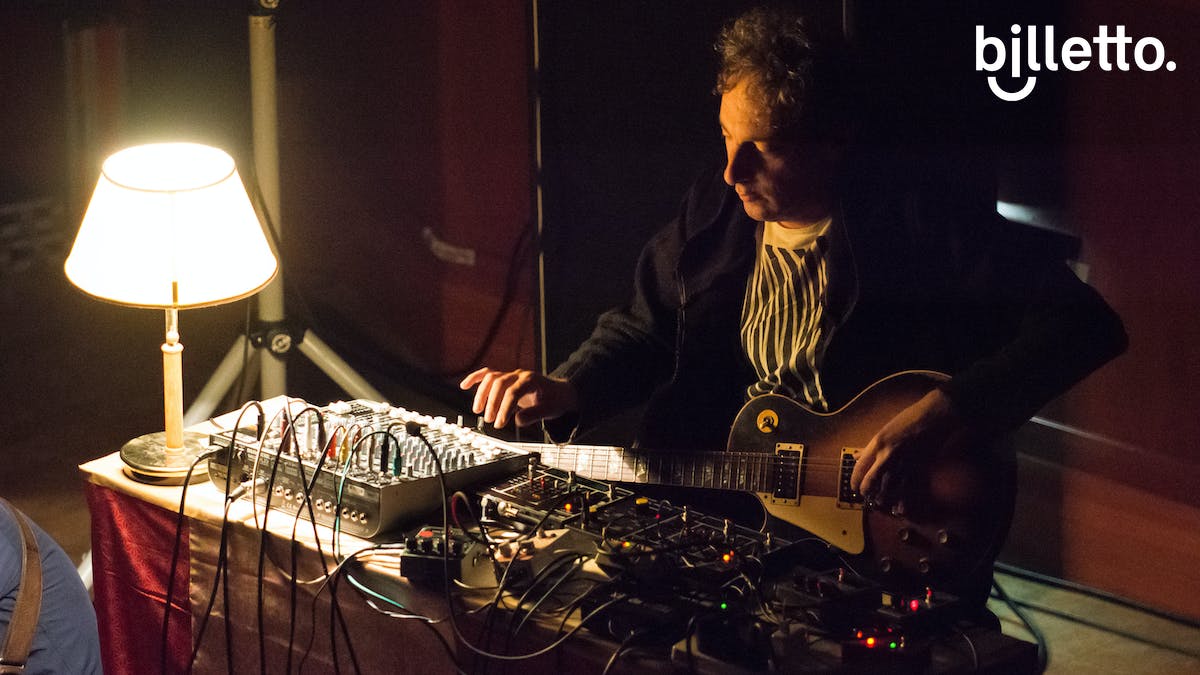 Oren Ambarchi is a composer and multi-instrumentalist with longstanding interests in transcending conventional instrumental approaches. His work focuses mainly on the exploration of the guitar, “re-routing the instrument into a zone of alien abstraction where it’s no longer easily identifiable as itself. Instead, it’s a laboratory for extended sonic investigation”. (The Wire, UK).

Oren Ambarchi’s works are hesitant and tense extended songforms located in the cracks between several schools: modern electronics and processing; laminal improvisation and minimalism; hushed, pensive songwriting; the deceptive simplicity and temporal suspensions of composers such as Morton Feldman and Alvin Lucier; and the physicality of rock music, slowed down and stripped back to its bare bones, abstracted and replaced with pure signal.

From the late 90’s his experiments in guitar abstraction and extended technique have led to a more personal and unique sound-world incorporating a broader palette of instruments and sensibilities. On recent releases such as Grapes From The Estate and In The Pendulum’s Embrace Ambarchi has employed glass harmonica, strings, bells, piano, drums and percussion, creating fragile textures as light as air which tenuously coexist with the deep, wall-shaking bass tones derived from his guitar.

Ambarchi works with simple constructs and parameters; exploring one idea over an extended duration and patiently teasing every nuance and implication from each texture; the phenomena of sum and difference tones; carefully tended arrangements that unravel gently; unprepossessing melodies that slowly work their way through various permutations; resulting in an otherworldly, cumulative impact of patiently unfolding compositions.

Ambarchi has performed and recorded with a diverse array of artists such as Fennesz, Otomo Yoshihide, Pimmon, Keiji Haino, John Zorn, Rizili, Voice Crack, Jim O’Rourke, Keith Rowe, Phill Niblock, Dave Grohl, Gunter Muller, Evan Parker, z’ev, Toshimaru Nakamura, Peter Rehberg, Merzbow and many more. Since 2004 Ambarchi has worked with American avant metal outfit Sunn 0))) contributing to many of their releases and side-projects including their Black One album from 2005 and the recent Monoliths & Dimensions release

Just put this in my calendar, if I'm not working that night. Is that venue where The Pint used to be?

Hey. It is indeed but it's been radically overhauled so your ears can rest easy Hoping to make it to this - looks amazing.

Wish I could, but 6am flight wah

jonah said:
Wish I could, but 6am flight wah
Click to expand...

On one hand, I agree you probably need your sleep. On the other hand, drones.

I fell the drones, but I feel sleep more. Already dreading that sweet 4am start

jonah said:
I fell the drones, but I feel sleep more. Already dreading that sweet 4am start
Click to expand... The first half was alright. Did he play a second tune? I ran off to catch a bus when he turned the amp off

diauhdiad? said:
The first half was alright. Did he play a second tune? I ran off to catch a bus when he turned the amp off
Click to expand...

Nope, that was it. A long track but a short set.

I thought I spotted you alright.

Cornu Ammonis said:
Nope, that was it. A long track but a short set.

I thought I spotted you alright.
Click to expand...

Yes, we were about 2 feet apart facing each other, standing in a circle with two others!

I was wearing a Cyclobe t-shirt (dark grey with white squiggles on the front). I was taking photos at the side of the stage in front of the Leslie speaker cabinet.

I forgot to change my work polo shirt, morto

Pulled something in my neck so couldn't go...FFS!

Cornu Ammonis said:
I was wearing a Cyclobe t-shirt (dark grey with white squiggles on the front). I was taking photos at the side of the stage in front of the Leslie speaker cabinet.
Click to expand...

This was excellent alright. Delighted to have finally seen him, I should have tried to get up to the front, as all I could see was his elbow and the top of his pint glass.

I was standing in the middle under the arch behind two lads with Sunn O))) shirts, I think I saw you. I had a look around for you after he'd finished, and I'd nipped upstairs, but you'd disappeared by then, I think!
New posts