My Cat Ziggy Died in a RTA last Wednesday (1 Viewer)

Am devastated..the was a beautiful, fluffy, affectionate little ginger Tom who would follow you everywhere, snuggle up to you and give you lots of head butts. I never knew that a cat could be like that, I always viewed them as distant and aloof creatures. But this fella was so similar to a dog in many ways. I'm heartbroken.

We knew something was up last Wednesday at around 7'ish when it started to rain and he never came in the cat flap. He hated the rain like most cats and this was a heavy sustained shower. He was never far away,..always hanging out the back garden where he befriended another Tom.

We scouted the area and out of the corner of my eye at the side of the kerb I spotted something furry and matted. Parked the car and walked back and sure enough it was Ziggy's little lifeless body. I buried him in the back garden. RIP ..just had to get this off my chest.

Fair play on giving him a nice send off.

Fair play on giving him a nice send off.
Click to expand...

Cheers bud,,I'm just glad I found him..would have been awful if we didn't know where he was and burying him in the back gives a small bit of comfort. 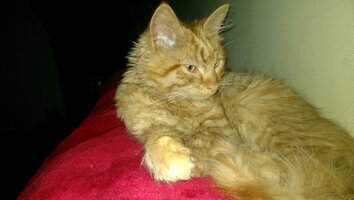 So sorry to hear this. Rip ziggy.

aw no. We had a very similar experience with Vlad. That was a bad day.
Sorry to hear this.

Sorry to hear about your cat @Splunk. Poor auld Ziggy.

Just want to say thanks to everyone who posted their condolences for poor Ziggy.
Reading them has given me a lot of comfort. Ye are all a great bunch here on Thumped. Happy Christmas