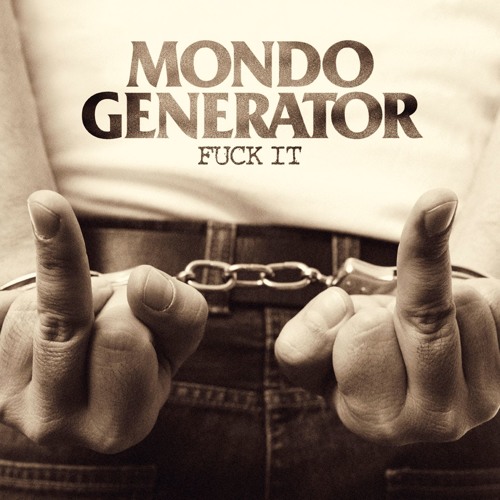 Nick Oliveri's legendary punk rock unit MONDO GENERATOR unveil the second single taken from their long-awaited new album 'Fuck It', due out February 21st on Heavy Psych Sounds and supported by a month and a half long tour across Europe.

Nick Oliveri's MONDO GENERATOR are back with their first studio album in eight years! Don't expect the L.A. trio to mince their words: 'Fuck It' is nothing but a wild ride; fourteen massive-sounding modern desperado tales in Nick Oliveri's horns-raising punk and rock'n'roll style. With desert rock patrons Mike Amster (Nebula) and Mike Pygmie (John Garcia) on board, 'Fuck It' is nothing short of epic and contagiously groovy! It will be available on February 21st in the following formats:
- 40 test press vinyl
- 250 transparent splatter black vinyl
- 250 gold vinyl
- 700 orange fluo vinyl
- Black vinyl
- CD and digital
MONDO GENERATOR New album 'Fuck It' Out February 21st on Heavy Psych Sounds PREORDER HERE

MONDO GENERATOR was founded in 1997 by Queens of the Stone Age bassist/singer Nick Oliveri. Initially intended as a solo project, the classic "Cocaine Rodeo" album was recorded that same year, but shelved until the Southern Lord label released it and its unique brand of criminal insanity to widespread acclaim and horror in the summer of 2000. The follow-up, "A Drug Problem That Never Existed," was released jointly in the summer of 2003 by Ipecac/Rekords Rekords to further critical acclaim. The following worldwide tour was filmed for the DVD release "Use Once and Destroy Me". In 2004, Mondo Generator recorded and released "III The EP".

In 2006, MONDO GENERATOR released "Dead Planet: SonicSlowMotionTrails" on UK label Mother Tongue, then released worldwide the following year on Suburban Noize Records. In late 2010, Mondo Generator would be put on a back-burner as Oliveri joined the reformation of legendary Kyuss (re-branded as Kyuss Lives! then Vista Chino), which featured John Garcia, Brant Bjork and new guitarist Bruno Fevery. In summer 2012, new Mondo Generator album "Hell Comes To Your Heart" was released by Mondo Media/Cobraside. After eight years without releasing any music, MONDO GENERATOR are back stronger than ever. "Fuck It" was recorded at Josh Homme's Pink Duck studio and due out February 21st on Heavy Psych Sounds Records.