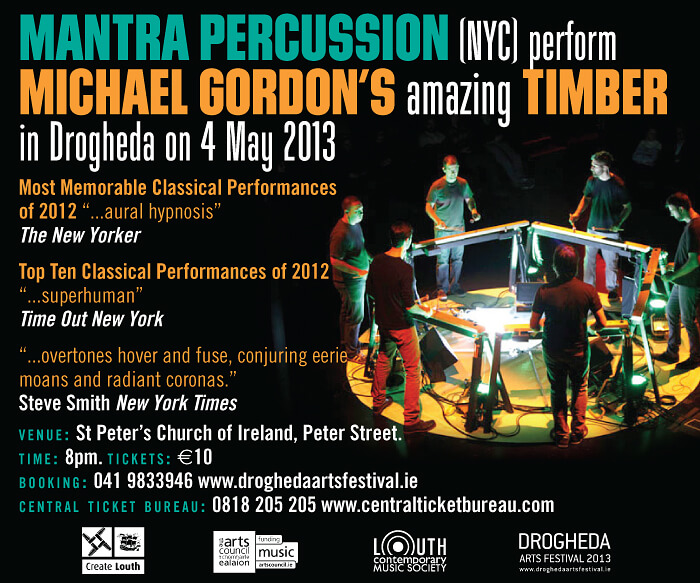 Louth Contemporary Music Society presents Michael Gordon’s Timber performed by Mantra Percussion from New York. The performance will take place in St. Peter’s Church of Ireland at 8pm on Saturday 4 May 2013 as part of the Drogheda Arts Festival 2013.
Described in the New Yorker as one of Most Memorable Classical Performances of 2012 “…aural hypnosis”
There’s something primeval about guys banging on wood. But the New York percussion group Mantra takes such primitive pounding to a surprisingly refined level.

For composer Michael Gordon’s mesmerizing new work – Timber, written for six two-by-fours pieces of timber – Mantra Percussion over the course of an hour, wring a rich array of sounds from the lumber, from chorale-like resonance to cascading Steve-Reich-like shifting phases.
Michael Gordon writes music that explores the extreme possibilities of rhythm, dynamics and texture. Gordon showcases his signature dynamic waves of textures and polyrhythms in Timber, an evening-length work for six percussionists.

Timber, a stunning and virtuosic work, is played on six instruments made from specially cut wooden planks. Timber brings the physicality, endurance and technique of percussion performance to a new level. The range of sounds and rhythms Gordon is able to get out of a single piece of wood is nothing short of astounding, and the music moves seamlessly from the visceral to the cerebral, from beat-driven to ambient, from delicate to overwhelming. It is a tour de force for the composer and the performers alike. The performers are the New York-based ensemble Mantra Percussion, hailed by the New York Times as “…finely polished…a fresh source of energy.”