Playing US Shows in May &
EU / UK / Ireland Shows this Fall: 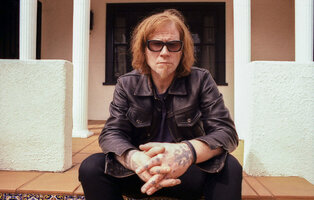 Just ahead of embarking on a US tour this May, today Mark Lanegan is pleased to announce news of his 11th solo album Somebody's Knocking that will see release on October 18th, 2019 through Heavenly Recordings. Alongside this news he has shared excellent first track 'Stitch It Up' as well as its endlessly-amusing video, which features actor Donal Logue reprising his legendary '90s MTV character Jimmy the Cab Driver, which has premiered on Stereogum.

Speaking on the track and video, Lanegan comments: "Had a blast making this video. We had some friends over for dinner and Joe Cardamone met Donal Logue there and they hit it off. When I later talked to Joe about directing a vid he immediately said "Jimmy The Cab Driver" I called Donal and he laughed for like ten minutes and was totally into it. My head was pounding from laughing so hard the day of the shoot. It was extremely tough to keep a straight face when Donal was in character, he turned into an updated version of Jimmy so fast. Both Joe and Donal are brilliant. There's a reason it's the first video of mine I've been in for the last 15 years."

Near the end of the last song on Mark Lanegan’s outstanding 11th solo album - Somebody’s Knocking - there’s a line that sticks in the listener’s mind long after the record stops spinning. “I felt its sound / down to my darkest, deepest root” Coming towards the close of the track 'Two Bells Ringing At Once', a gorgeous hymnal constructed from hazy ambient tones and swelling strings, those words might just sum up the driven artist’s unshakable compulsion to create as well as the music lover’s perpetual necessity to keep on seeking new sounds. And Mark Lanegan is very much both of those things.

From the opening bars of 'Disbelief Suspension' onwards, it’s clear that Somebody’s Knocking is an album made by someone deeply obsessed with how music - with all its primal, spiritual healing power - truly penetrates the soul. As a result, there’s joy in the music, as if created from a perfect set of inspirations smashed and grabbed from God’s own record shop.

Some of the influences are oblique, others direct and fully respectful. From the Raw Power-esque garage metal grind of that opener to 'Letter Never Sent’s' rocket-powered take on Love-era kaleidoscope-psych, through the pensive subterranean murk of 'Dark Disco Jag' and on to 'Playing Nero’s' sun-bleached riff on Joy Division’s 'Atmosphere', there’s the glee of infatuation running deep in the tracks. And, in some ways, that display of infatuation serves to change the very perception of Lanegan the artist - this album being less the tale of a brooding, crepuscular rock’n’roll veteran and more that of someone consumed by a lifelong love of words and sound fused together.

With that perception shift in mind, one of the most remarkable moments on Somebody’s Knocking is 'Penthouse High' a track that positively blooms, sounding like a love letter to imperial phase New Order. For Lanegan, it signals a return to one of his formative musical loves from a time even before he joinedScreaming Trees.

“I’ve always been into electronic music since I was a kid,” he says. “I think the reason those elements have become more obvious in my music is that my tastes have changed as I’ve grown older. The bulk of what I listen to now is electronic. Alain Johannes and I had actually written Penthouse High for Gargoyle(the 2017 album the Guardian stated saw “Lanegan in the form of his career”) but then it didn't really fit on that record. I have been a huge fan of New Order and Depeche Mode forever and have wanted to do a song along those lines for a long time - a blatantly catchy, old-school dance-type song.”

Although Somebody’s Knocking came together in an eleven day session in L.A. (Lanegan’s hometown of the last twenty two years), many of the deepest musical influences on the record are European, be they the aforementioned electronic artists or newer, murkier forms provided by writing partners Martin Jenkins(who records as Pye Corner Audio for Ghost Box) or Rob Marshall, a collaborator on Gargoyle and on his own, forthcoming debut album as Humanist. In each case, Lanegan approached working with each of the writers from the perspective of a fan.

“Rob approached me a couple years ago about doing some some songs for his band. I liked it immediately, and found it easy to write melodies and words to, so i said sure. After that, he sent me an email thanking me and said that if i'd ever like him to do something for me, just give him a shout. This time round, I needed some tunes and took Rob up on his offer. He gave me music for five tracks. With Martin Jenkins, I’d been a long-time fan of his electronic music - I’ve had him work on both my remix records in the past,” says Mark.

Lyrically, Somebody’s Knocking sets the listener off down multiple rabbit holes, painting deeply psychedelic pictures where someone’s “drip, drip, dripping acid out of the dropper” ('Disbelief Suspension') or where “the hounds are behind me/footsteps following/you know you can't find me/I’m miles from the crime scene” on the monumentally addictive 'Stitch It Up'. More often than not, Lanegan’s lyrics are written reactively to music.

“I feel like I write lyrics instinctively. I let the melody come first and then it tells me what the words are going to beand I write whatever feels appropriate. That said, I'm also influenced by everything I'm into. I don't usually like to talk about what a song means to me; I prefer that the people who connect with a song do so with their own interpretation. It never crossed my mind what Neil Young meant by After The Gold Rush, only the personal movie it created in my head. My entire life, all the music that I've connected to has drawn me in like that. Joy Division, Nick Drake, Son House, Thirteenth Floor Elevators, the Gun Club… all the music that meant the most to me, the music that saved my life was the music that told my own story back to me.”

While on the whole, interpretations are left for the listener to decide on, there are aspects of the real world that can’t help but seep subconsciously into Lanegan’s songs. “It seems to me that the entire world is in a weird, precarious place right now. I try to not be someone in a constant state of worry and alarm but watching the massive divide that is taking place and the political situations, especially in the US and UK makes me think, “what the fuck are these idiots thinking?” The hatred, racism and all this other fear-driven shit, these "adults" that continually drive the machine that perpetuates this ignorance to their own ends should all be in the prison cells instead of the non-violent drug "offenders" in them now. I can't specifically say how any of this effects my writing but I know that most of the things that occupy my thoughts have a way of coming back out in a song.”

At the end of the day though, Somebody’s Knocking doesn’t need to be either commentary or allegory. Like Lanegan’s best work, it tells its own stories and weaves its own wonders, conjuring up feverish hallucinogenic visions to sit atop roughly hewn rock and glassy, brilliant bright electronics. And then it leaves them to penetrate their own ways right down to our deepest, darkest roots.

Mark Lanegan will embark on string of US tour dates and festival appearances starting the first week of May. Supporting Mark on the tour will be Simon Bonney (of Crime & the City Solution). Following that he will embark on an extensive UK / EU tour kicking off the end of October in Spain and ending in Ireland in December. Full dates are listed below.