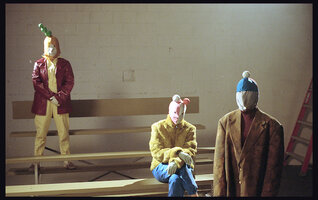 MONTRÉAL TRIO LUNGBUTTER RETURN WITH A NEW VIDEO FOR THE TRACK "CURTAIN"
TAKEN FROM THEIR DEBUT ALBUM HONEY, OUT NOW VIA CONSTELLATION


Lungbutter return with a striking new video for the track: "Curtain" taken from their debut album Honey which came out earlier this Spring via Constellation. Live dates for the UK are currently being booked in for April 2020 - more details to follow in due course.

About the track the band remarks:"The lyrics of this song are about the struggle to be legible to others. They come from the feeling of simultaneously being lonely and spending too much time having long and circular conversations. Our brains and selves are all obscure to us."

The Montréal trio serves up an exhilarating and relentless barrage of astringent noise-punk, at times refracted variously through sludge rock and slowcore. Kaity Zozula's tri-amped guitar squall occupies a huge tonal space from low-end bass to paint-peeling treble, redolent of blown-out Melvins/Flipper fuzz and indebted to the frenetic dissonance of Keiji Haino or Merzbow. Song structures coalesce around guitar riffs of shifting tempos and the backbone of Joni Sadler’s muscular, deliberate drums, while Ky Brooks’ wry phenomenological sing-speak vocals – at once mantric and declarative – deconstruct one brilliant lyrical theme after another, dancing along the knife-edge of dispassionate acerbic examination and wide-eyed cathartic revelation.