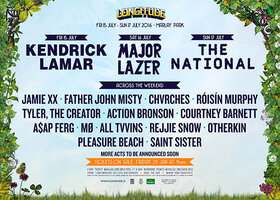 TICKETS ON SALE NEXT FRIDAY 29TH JANUARY AT 9AM

Longitude returns to Marlay Park from 15 - 17 July, headliners each day as follows.

On Saturday 16th Major Lazer lead the line up. Their global smash hit ‘Lean On’ was recently named the most streamed song of all time and has been viewed over a billion times on YouTube while Diplo was named as the most Shazamed artist of 2015. The band are up for Best International Band at this years Brit Awards.

Closing the festival on Sunday 17th are The National. No strangers to these shores, the Ohio band released their latest album ‘Trouble Will Find Me’ on the back of a twenty-two month tour promoting their previous LP ‘High Violet’. ‘Trouble Will Find Me’ is The National's sixth album, and has been released to huge critical and commercial success, cemented by the band's celebrated live show.

That poster just looks like someone needs to learn to spell.

1 act I'd really like to see. 2 I'd like to see but it wouldn't kill me to miss them. The thoughts of seeing any of the rest make me physically ill.

Can we begin the female/male band member ratio outrage early?

The drive like jehu atp is actually fairly appalling in that regard, only two women so far

It annoys me that they only put days for the headliners.
A couple of acts I like and would be interested in seeing but not too fussed if I decide not to go. It all depends on how the days work out.

the only act I really want to see is Courtney Barnett.

thats 2 ladies and one gent.

my conscience is clear
L

Kendrick Lamar though, surprised an Irish festival managed to have the wherewithal to book him.

I thought this was one of these fake festival posters with a load of made up nonsense band names.

3 months have passed and no more acts added
N

The Sunday lineup is looking excellent now. It should get the thumped punch of approval 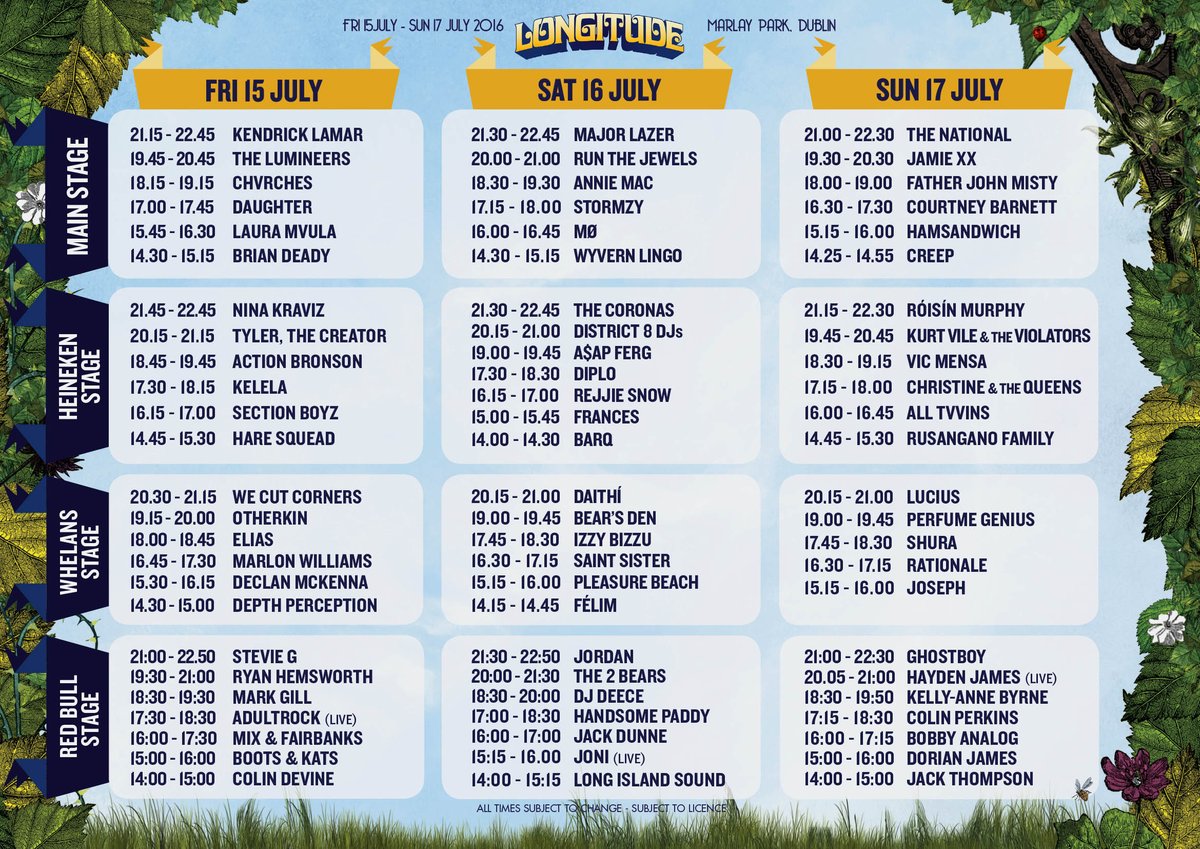 I could easily have a good time at that Sunday line up. Haven't been tempted by anything in Marlay Park in over a decade.
L

I'd like to see Kendrick and Roisín Murphy but not gonna bother.

I wonder is Kendrick's live band any better than the faceless session lads he had a few years back? I assume Thundercat and Kamasi Washington don't back him up live.

Up until I started hearing ads for this on the radio I have spent my life believing it was pronounced "longtitdude".

How they must have been secretly laughing at me in the boat club while I told them of my global adventures.

I have never heard a Kendrick Lamaar song in my life. The Friday and Saturday line ups are completely alien to me tbh. But I could make it from Rusangano Family to Roisin Murphy on sunday with a good run, 90 minutes between Christine and the Queens and Kurt Vile to eat food and take selfies.

yeah, same, 1-day tickets went on sale today for the sunday. Tempted, but didn't go for it in the end.

tbh, I'd be paying 65 quid to see Courtney Barnett and whatever else I know up front isn't terrible.

Which doesn't leave a whole lot. At least Roisin Murphy clashes with the National so people have something else to do than be bored shitless by them.

Id love to see Kendrick Lamar the Friday,but havent had much success in my hunt for a freebie so far.Went in to catch Danny Brown last year which was deadly,highlight of the day was flocks of high fuckers post Chemical Brothers queueing up to try to
rub Garda horses

doesn't anyone ever pay for stuff anymore?
New posts