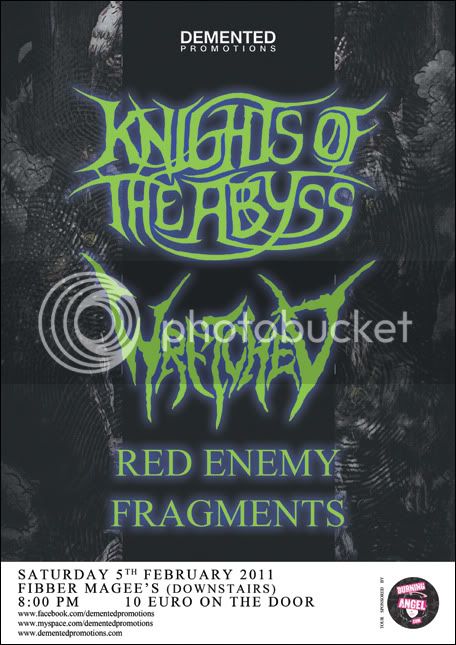 KNIGHTS OF THE ABYSS (US)
Ferret Music
(http://www.myspace.com/knightsoftheabyss)

"If, in the last five years, you’ve somehow managed to miss out on Glendale, Arizona’s Knights of the Abyss, it’s time to change that. Since 2005, the death metal outfit has toured with the likes of The Acacia Strain, Annotations Of An Autopsy, and Arsonists Get All The Girls and they’ve released two explosive albums through Candlelight/S.O.A.R. and Ferret Music respectively, 2007’s ‘Juggernaut’ and 2008’s ‘Shades.’ On August 17, Knights of the Abyss will unleash their third opus, ‘The Culling of Wolves,‘ an album that’s going to change a lot of preconceived notions about Knights.

Those familiar with Knights of the Abyss may not recognize the band on ‘The Culling of Wolves,’ but then again, they may not recognize any of the band members’ names. Aside from founding guitarist and main Knights song scribe Nick Florence, Knights is rounded out by an entire new cast of characters. Vocalist Harley Magnum joined the band this year, while guitarist Brian McNulty, drummer Ben Harclerode, and bassist Griffin Kolinski entered the fold in 2009.

The result is a more mature, more focused, more metal Knights: This is a death metal band, not a deathcore group, as they’ve been so unfairly labeled. ‘The Culling of Wolves’ sounds like a cross between Black Dahlia Murder, All Shall Perish, and Behemoth and it’s a devastatingly vicious blitz on the senses, inspired by the melodic death metal greats of Gothenburg.

“The main writing force of the band, as far as guitars go, is still there, but for the most part, there’s a lot of influence from the new members and I think fans are going to hear that on the new record,” explains Kolinski, who, like the rest of the band, was approached by Florence to replace members who’d left to pursue higher education and other endeavors. “I do feel that this is the strongest and heaviest Knights record to date. It is a completely new band, but this new record does have elements on it that old fans will like. We’ve moved away from some of the old stuff, and there’s a lot more groove and heavier aspects on the new record. Some of the old fans will love the new direction we’ve taken.”

‘The Culling of Wolves’ contains 11 blistering, crushing tracks and, while a concept record, not your typical concept LP. There’s no story that runs through the disc, but there was definitely a major inspiration behind songs like “The House Of Crimson Coin,” “The Swine Of The Holy Order,” and the first single, “Deceiver’s Creed”: The U.S. Treasury Department.

“I am afraid it probably is a very opinionated record, but we’re not slamming anyone; we’re just making our opinions known,” the bassist says, before explaining that some songs focus on the creation of the Federal Reserve while others revolve around The Bilderberg Group (an unofficial, invitation-only conference of men of influence in the fields of politics, banking, business, the military and media) and Bohemian Grove, a 2,700-acre campground in California that hosts an annual three-week encampment of some of the most powerful men in the world.

To support ‘The Culling of Wolves,’ Knights of the Abyss plan on spending the next year or more on the road, and already have tours lined up with Cattle Decapitation, Conducting From The Grave, Burning The Masses, and more.

“We’re death metal and that’s all we’ve ever wanted to be,” says Kolinski in conclusion. “We’re not trying to associate ourselves with anything but death metal. We want to head out with bigger straight metal acts and we don’t want to back ourselves into a corner. This record is a huge expansion on the band and a natural progression for this band. We’re a new and improved Knights. This version is bigger and better and we’re more solid live.”"

"WRETCHED is a melodic death metal band based out of Charlotte, North Carolina. Formerly known as And Since Forgotten, WRETCHED was formed in September of 2005. Recreating what seems to have disappeared from the NC scene, is the blend of European, and American Metal. For the first time listener, WRETCHED brings sonic mayhem to their ears, leaving them with a craving for more. Keeping the NC thriving music scene going, WRETCHED are an immaculate take on this music scene. They are unstoppable, unyielding, and powerful live and on record. With a devastating live show, a show attendee leaves more than satisfied anticipating the urge for more WRETCHED. "