Managed to do a whole day without falling today. Totally getting used to handling the road bike on ice now. Still pissed my mountain bike is off the road for the next while. Funniest thing today was when I'd stopped at the top of Harolds Cross bridge chatting to a guard and I start sliding down the hill away from him while I'm asking can a leg it on through. Also had a car slide sideways towards me on Pearse St thankfully both of us were going really slow.

thats really shit news. I read about it on some cycling sites earlier today. Manys a time I've been in a group like that. The thoughts of a car ploughing into us..... jaysus....

in other news, I'm back on the bike tomorrow (commuting) after 2 weeks off work. Will be an interesting morning to start back by the looks of it. I remember doing a -9 in the last cold snap. Its to get to -10 tonight but I'm gonna wait til daylight (after 8:30am) before setting out. I'm on a hybrid and am now very thankful I insisted on 35mm tyres when I bought it.

diddles was out earlier and she said the roads are slippery as fuck, worse that last week. i'll decide in the morning about cycling.

Haven't cycled in about 10 days now. Probably the longest lay-off, well, ever, probably. Can't believe that news story. Really depressing. Scary to think of the velocity of a car that could kill 8.

the roads were fine. Obviously caution is required, but I got across (knocklyon to fairview) grand.

Temperatures were well in the minuses. The water bottle was frozen when I got here. Deadly!

The roads were fine but more terrifying than last week (imho)

House mate crashed off his bike on the way in this morning, he said the lower Kimmage Road is covered in black ice. Glad I've only a four day week to get through this week. Think I may be buying cyclocross tyres before too long, wish worke would get them into the shop so we can get them on the cheap.. 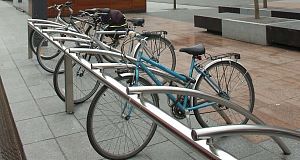 can't say i disagree with the idea,some cyclists are complete assholes and cycling without lights is just plain stupid,you deserve to be hit if you do it regularly.

Your brakes, tyres, chain, lights, reflector and bell must all be in good working order.
Your bicycle should be the right size to allow you to touch the ground with both feet.
When carrying goods, you should use a proper carrier or basket and take care that nothing is hanging loose.
At night you must carry a lamp showing a white or yellow light to the front and a lamp showing a red light to the back. These are the minimum lighting requirements laid down by law. However, to be even more visible to motorists at night, you should:
add strips of reflective material to the bike (white to the front and red to the back),
wear a reflective armband, and
wear a "Sam Browne" reflective belt or reflective vest.
Click to expand...

Yeah, I got a fined about 3 years ago for not having lights. Separate fine for front and back lights, totaled 300 quid I think. Which was a load of shit as I was desperately poor back then... fuck you Judge.
C

ann post said:
http://www.rotr.ie/rules-for-pedest...sts/cyclists/cyclists_roadworthy-bicycle.html "Your bicycle should be the right size to allow you to touch the ground with both feet."
Click to expand...


emmm......I don't do that, it's not an efficient way to cycle. Unless I get off the saddle. But maybe I misunderstand and that just refers to penny farthings or something.

But anyway yeah, I would have expected Dublin City Council to have some grasp of traffic law, and know that all those things mentioned are already illegal. But maybe I misunderstand this as well, and the penalties they refer to are inpromptu soccer style peno's on the street with the offending cyclist in goal.

Careful on any frosty roads out there folks. I left a friend's house earlier, nudged the bike to turn left and went straight down. HUGE bruise on my hip and aggravated a groin strain that I got from the marathon. Hobbling about the place now. I didn't realise frost works similar to ice, the bike just went from under neath me.

sounds nasty. I took it fairly gingerly this morning. Once the temps get below a certain point my back brake just refuses to work. It caused me to come off (with the help of some black ice) the other week, and didn't fancy running the risk again. I came in at postman pace.

One thing I've been noticing is that the temperature can feel fine, then all of a sudden you cycle into freezing air and the temps feel like they plummet 5 or 6 degrees in an instant (my temperature gauge is my cheekbones). This morning didn't feel so bad, apart from pockets around terenure (specifically that stretch by bushy park and terenure college where you've fields both sides (I guess thats what the weather folks mean when they say temps are lower over snow fields). It was still as low as -6 (or -8 according to google) though. I reckon -3 is the point that it really stops being fun and you start being fearful. With a bit of luck the cold will fuck the hell off soon.

On that thing about the laws. Fair enough and all. But I think their energies would be better spent doing motorists for breaking red lights than doing cyclists. In the majority of cases a cyclist is only a menace to themselves if they misdemean (sic). Motorists not so.

I agree on the lights thing. Some mornings of late have been really dark (the moon seems really low at the moment in the mornings), and its total craziness not being visible. A lad on a fixie was being a pain in the whole one of the days last week when he cycled out in front of me. He wasn't lit (and was blocking my light from oncoming traffic), and he wouldn't signal piles of slush that he'd only swerve around at the last second (when I was on his wheel). Then the cops pulled him in and did him for not having any lights, which at 7am on a snowy, icy morning, was proper order.

a handy image there

I don't signal enough, I always forget. There's my confession for you scutter. I got new brakes yesterday so cycling seemed like a right lark this morning.

I wussed out and stayed home.
New posts