you clearly didn't read the spiel!

rettucs said:
nice, did you throw in the cat too?
Click to expand...

nope, just saw a picture of a bike. Not possible to read when bikes
M 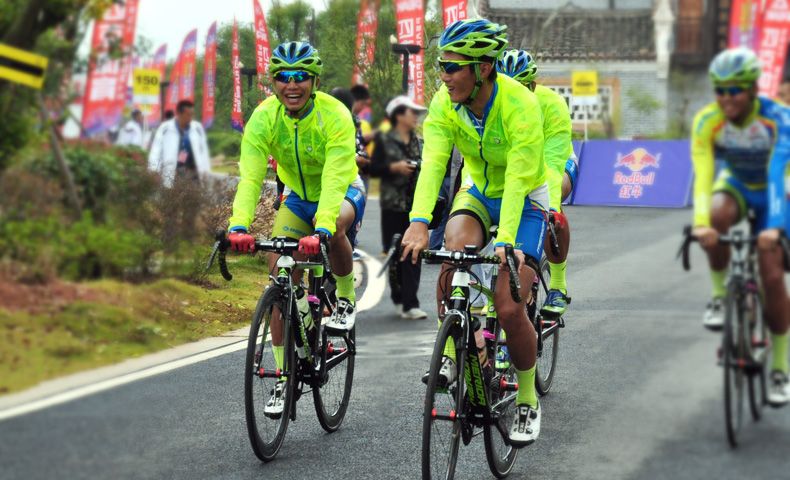 A study by researchers at Bath and Brunel universities has found that wearing hi-viz clothing while cycling doesn’t have a noticeable impact on the distance at which drivers pass cyclists by. Some 269 cyclists rode bikes fitted with distance-detection devices and dressed in a range of cycling...

Colombia Tour on @ roughly 6-8 pm everyday until Sunday if you are interested.
this was the final stage last year - MAGICO !

Just picked this up for myself for a fucking song!

Chuffed so I am 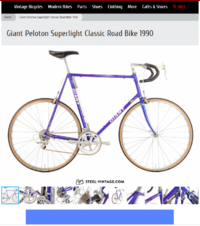 that's a lovely looking piece of kit. i am now very afraid to browse that site.

magicbastarder said:
that's a lovely looking piece of kit. i am now very afraid to browse that site.
Click to expand...

It was the biggest, and cheapest, bike they had

7 - No tomorrow said:
Just picked this up for myself for a fucking song!
Click to expand...

I clearly flogged off bikes a bit on the cheap side.

I still have my favourite though, an old Raleigh 531 with a Superbe Pro group on it.

The worst story I heard was a mate who was over in the US with me. He rode in the Olympics and had a track bike, and a road bike custom built for him, Irish colours, complete with his name on the top tube.

He left those bikes with a pile of other bikes, all of his race bikes basically, hung up in his old man's garage.

A few years afterwards he was back visiting, and went out into the garage to see his bikes... gone. Every one of them.

He asked the Da where he's moved all his bikes?

"Oh those things? I put them out for the bins years ago."
M

similar happened a colleague. left a lovely raparee in his dad's house, who gave it away 'to the nuns'.
M

Milano -San Remo should have been on today :
here's a few of my favourite editions from over the years :
strangely i could only really think of one race from the 21st century for this :

1992
Kelly's finest moment for my money.
several years before earpieces, Moreno Argentin should have had
the race won on the Poggio descent BUT Kelly (only two months
from his 36th birthday). caught him with 1 km to go after a crazy
descent and sat on his Argentin's wheel and comfortably won the sprint.
this was one last few races Sean won in a final battle between the two
best classics riders of their generation.

Argentin was the alpha male of Italian cycling and was a powerful figure
in the peleton. he also two great battles with Roche in 1987 at Liege
and the Worlds.
Kelly brilliantly ended Argentin's best ever chance of winning
Italy's biggest classic. the groan of thousands of Italians at the finish
line when they heard Kelly had caught Argentin said it all.

Notes:
Argentin, seemed set for a long career in team management but quickly
realized it didn't suit him and then ran a construction business.
while this seemed to be successful, the last i heard of Moreno was
that he had been jailed in 2016 for a year. he and a business partner were
convicted of selling a house which which had a loan outstanding on it to
unaware buyers...

another rider prominent in the 1992 race was the little remembered
Belgian Jim Van De Laer. Jim was a promising rider of the generation
of Zulle, Virenque etc. but he retired in 1997 aged 29.
in the EPO era his career faded away and i've heard it said he
was an honest lad.
Jim Van De Laer - Wikipedia

the action really kicks off @ 48:35 when Marco Pantani's attacks.
Michele Bartali (the best classics rider at the time) launches a
counter attack @ 49:50 (mostly out of vanity which blows his own chances)
then Italy's other big star Mario Cipollini is dropped @ 50:05 and squirts
his water bottle at he camera to say goodbye.
and that's all before the Cipressa climb really kicks in.
after regrouping and more attacks 1996 winner Gabriele Colombo goes
clear over the Poggio climb but is caught with 1.3 km to go.
with nearly 70 riders at the front defending champ and race favourite
Erik Zabel's Telekom team mates are nowhere to be seen.
more attacks follow into last km then....
@ 1:14:20 with 700 metres left 36 year old Andrei Tchmil (with his
team mate Jo Planckaert behind him to deter anyone getting on his wheel)
launched a huge attack....
flying alongside the barriers, tightly he takes the turn in the finishing
straight and after two rapid looks over his shoulder is able to
celebrate, with Zabel and with the awesomely named Pole Zbigniew
Spruch leading in the main group @ 1:15:02

despite size of the huge group Zabel Telekom team had failed him badly -
he had not one team mate there despite riding for the strongest team of
the time. Tchmil's much weaker team had 5 riders.

Tchmil (36) was the oldest rider in the race and later won Flanders in
2000 with a similar attack.

Tchmil was lavished with praise by the Belgian media (who weren't
as keen on him before he took Belgian nationality) for these wins.
this hadn't been so forthcoming when he won Roubaix in 1994 beating Musseuw.
now he was often cited as being more of a Flandrian hardman than
the Flandrians themselves.

strangely this was the only Belgian win at San Remo since De Vlaeminck in 1979.

in the mid 90's Belgian cycling was at it's weakest with Johan Museeuw
being their only top rider.
Lotto was for a while the only top level Belgian team and they were
struggling. a 1995 Tour mountain stage were they lost several riders
was possibly the worst moment - leading to a savaging in the Belgian media.

Lotto's only big star was former Soviet rider was Andrei Tchmil
(pronounced Schmil).
as a child his mother was an opera singer who travelled all over the
USSR and when the country split Andrei now living in Italy changed
nationality several times.
after turning pro in 1989 he found the flatter classics were his calling and
after becoming Lotto's leader took out Belgian nationality - a very smart
move that transformed his popularity with the Belgian public.

here's a very nice Belgian documentary on Tchmil:
the intro opens up his San Remo win with Flemish commentary.
you even get to see his mother singing.

there are lots of other documentaries in same series featuring the likes
of KV Mechelen FC, Johan Musseuw, Michel Pollentier, jan Ceulemans etc.
which are all excellent if you have a good idea of the background story
(or speak Flemish !)

and moving on to my fave of the 21st Century, still fresh in the memory -
2018.
this was the best race of the year.
this all happened on the descent of the Poggio.
afterwards Nibali (unusually) was universally praised.
Grand Tour winners are often not too bothered with classics - not this guy.
no questions about doping as is usual the case when someone wins in
spectacular style.
people just enjoyed it for a change.
(No "NO WAY --------- IS CLEAN" thread on The Clinic forum for once !)


a few other suggestions -

Saronni 1983. his solo win was a demolition job.

Chiappucci 1991 - Claudio forced a break on the Turchino Pass (!!) by Poggio
there was just him and Sorensen left. he dropped Rolf and rode into San Remo
alone. first time i saw the race live.
Freire (2004) -
in sprint finish Zabel raised his arms in victory
and Oscar Freire threw his bike at line to snatch the win.
Zabel took it in good grace i have to say.
Eurosport didn't show race that year as broadcaster's asking price was too much.
Last edited: Mar 21, 2020

I think my favourite moment was the collective Father Ted style "ah for fucks sake" from the Italian crown when Kelly pulled up alongside Moreno Argentin on the descent of The Pogio.

Although, I noticed there, Argentin had Campag Delta brakes, and Kelly had some other fancy class of brake that probably had some influence on your speed.

also the amount of top riders Italy had in those days is striking.
until early 2000's about half the riders in the Giro were Italian.

e.g. on the back cover of original pressing on A Rough Ride by
Kimmage there is a photo of what i'm fairly certain is the
1984 Giro di Lombardia won by Hinault.
the clue is the autumn weather and Kelly in a Skil jersey near
the front wearing #1 (as 1983 winner).

but the amount of Italian teams in the shot (taken from behind/above
the peloton) is amazing.
i reckon there are twelve (yes, 12) different Italian squads in the shot.

this week should have had the Volta Catalunya which had a stunning
start list last year - easily the best GC and climber wise outside
the grand tours.
when Dan Martin won the race it was on the verge of folding.