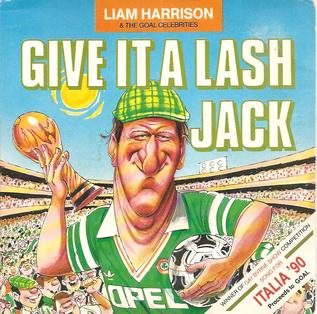 Give It a Lash Jack - Wikipedia View credits, reviews, tracks and shop for the 1990 Vinyl release of "Give It A Lash Jack / The Boys In Green (Italia '90)" on Discogs.

www.discogs.com
EDIT:
I've listened to this three times now and Put 'Em Under Pressure twice.
it's stuck in my head now along with Jack's quotes.
Last edited: Apr 27, 2022

Give It a Lash Jack - Wikipedia

View credits, reviews, tracks and shop for the 1990 Vinyl release of "Give It A Lash Jack / The Boys In Green (Italia '90)" on Discogs.

www.discogs.com
EDIT:
I've listened to this three times now and Put 'Em Under Pressure twice.
it's stuck in my head now along with Jack's quotes.
Click to expand...

" be prepared for carpet in your kitchen and bathroom"

" be prepared for carpet in your kitchen and bathroom"
Click to expand...

For fucks sake. An American whining about needing a car to get around. And not being able to take a train to the rest of Europe. And “my immigrant friends migrated elsewhere”.

thumped said:
For fucks sake. An American whining about needing a car to get around. And not being able to take a train to the rest of Europe. And “my immigrant friends migrated elsewhere”.
Click to expand...

That was hilarious!
Hey, he had plenty of options but chose to come to Dublin. Shoulda done his research before hand.
Maybe has a grudge against the drunk Leprechauns he chose to socialise with.
M

strong 'my father in law vibes' off pete there,

Joe Duffy is discussing this with the people of ireland

Who has carpet in their kitchen or bathroom?

Cornu Ammonis said:
Who has carpet in their kitchen or bathroom?
Click to expand...

Deadmanposting said:
Yeah
A lot of it is stuff we'd say ourselves
Everyone gets their heckles up when it's a foreign saying it
Click to expand...

Yeah, I’m frequently giving out about our lack of train service to Düsseldorf. Is that one that only goes from Heuston?

Cornu Ammonis said:
Yeah, I’m frequently giving out about our lack of train service to Düsseldorf. Is that one that only goes from Heuston?
Click to expand...

I said 'a lot of it', not every thing
She's saying that it's a reason not to move to Ireland; a lack of train connectivity is a drawback when compared to Britain and the rest of Europe. She's telling prospective emigres to note bene.

And fwiw, there was quite a ruckus of complaints only a few weeks back about the queues at Dublin airport security.
We're at the very least indirectly complaining about what is essentially the only way off the island for most people.
We can't run our only viable egress correctly. It sucks. We complain about it. We love a good moan.

From what I can gather from reading online reactions, most people reading this have gotten mad at the headline - and particularly because an American has written it - have gone through it to pick out the two things they can find to object to; carpets and Island.

If you want to be mad at her, go ahead.
It resonated with me overall.
I don't know why anyone would move to ireland, if they had Germany or France or Italy as choices.
I know Italians and Germans that live in dublin, and it genuinely puzzles me as to why they do.

Sorry, went on a bit there excuse me

I largely agree with you, in that most of the points are really valid. Everything said about the airport is spot on. However, the two really ridiculous things are unintentionally hilarious. It’s like writing a beautiful, mournful requiem and then sticking a jazzy “shave and a haircut, two bits” into the middle of it. It’s so jarring as to pull entirely from the rest of the work.

Was feeling weird about waffling on there
N

What American Margo said is largely very true but if it's like complaining about the lack of amenities in Horse and Jockey co.Tipperary (a townsland at the Thurles junction of the Dublin to Cork road).
Ireland is a bit crap at a lot of things - Margo should know it's part of the 'new experience' of living in another country! Margo's here voluntarily but pity the poor refugees thinking:
''I can't wait to get out this dump!''.

highly aspirational Dublin based youtuber Ana Maria from Moldova is much funnier (she's not very self aware).
especially this one - you can never have too many new years goals!

Ann Maria's youtube channel. much of it about living in Dublin / Ireland.

My favourite uptight American tourist I ever met was in a Tramore caravan park in 1983:

We saw an igloo shaped tent which very unusual then - we'd never seen one before.
So me (aged 7 1/2) and my older friend (aged 13) were standing right beside it saying how weird it looked when he deliberately tripped me up and I fell onto the tent!
My pal ran off and I could hear two people inside getting up, I desperately tried to untangle my feet from the tent and run off but this guy in his twenties with a beard came out before I could.
I said someone tripped me and my pal must have felt guilty and he was spotted in the distance and came back.
American Man went on a rant about how his wife had been woken up (never saw her) and how nobody respected personal space in Ireland.
American Man then asked us which caravans we were staying in and my pal (lying) pointed at a mobile about 20 metres away. American Man then said ''You guys (in that mobile) are always walking right past my tent talking loudly and not respecting my space! What is it with people here?!''

After he let us go I was still scared of him, thought I was in big trouble and was dreading him knocking on our door which he did about 15 minutes later.
I can't remember if we told my mother what happened but my pal sat in the door side corner of the caravan and American Man never saw him there.
Then American Man had a rant to my mother about his wife being ''woken from a deep sleep'', all the things he didn't like about Ireland and how he ''had a low opinion of the country''.
American Man went off I assume planning to rant some more to the folks in the mobile home my friend had lied to him about staying in, which hopefully had hilarious results!

I thought my mother was going get angry with us but she thought American Man was hilarious and must have been trying her hardest not laugh at him. 'Mom' still trying not to laugh said ''Lads there could have been a TV in the tent!" in a seriously half arsed attempt at a lecture.

By the end of the next day the igloo shaped tent was gone. Hopefully the Yanqui imperialista honky fucked off back to America and never came back.
New posts