It’s been a little while in the making but Hope *2 is finally out. I asked a number of people one question, What was your favourite gig? I have to say I was pretty overwhelmed with the response and people were very willing to give up their time whenever possible.

So much so that it has been split into two volumes. The second, an Irish only edition will come out next mothnext month

For the first one I received over 70 contributions from peers. People from bands like Fugazi, Chumbawamba, Youth of Today, Bear Trade, Paranoid Visions, The Winter Passing, Soulside and The Van Pelt. People from record labels like Make that a take, Revelation, Slumberland. People from fanzines like Bald Cactus, Fear and loathing and Loserdowm. Photographers like Glen E Friedman, Shawn Scallen and Ricky Adam. Authors like Philip O Connor and Michael Stewart Foley. There’s tons in the 54 pages, each contribution tells the simple story of "what was the favourite gig if the contributor.

Being a punk rock fanzine and coming out soon after the UN announce that one in every 122 are displaced there has to be a benefit aspect to this. Obviously with the ongoing war in Syria and the human disaster that is the current refugee crisis we felt it was imperative to do something to try and ofer some comfort to people who have had their homes and homeland blown to smithereens and can't stay there anymore. There are any number of worthwhile groups doing positive works as governments try to figure out how they can meet their obligations under international law. However, after talking to irish activists who have travelled over to the Greek islands the call seems to be to try and help community gorups on the ground, these all volunteer groups are putting al their resources into assisting people.


PIKPA is an open refugee camp in Mytilene, Lesvos. It a self-organised, autonomous space run by volunteers and is built on the principle of solidarity. Pikpa opened three years ago and is now a growing and evolving camp in response to the dynamic nature of the refugee crisis on the island.
They We believe that no human is illegal and that borders should be open. Pikpa is the only open camp in Lesvos and it is our dream that all refugee reception centres are run in this way. Our main objective is to stand in active solidarity with the refugees and fight against the barbaric European immigration policies. We raise awareness and do advocacy work around human rights violations and any acts of humiliation, violence and attacks against refugees. We work with local people to involve them in our work in order to promote community and sustainable action.

Pikpa Lesvos
About us

Hope *2 is a benefit for this wonderful group.

It is available for €5 ppd from Hope, 31 Hazel Road, Donnycarney, Dublin 9 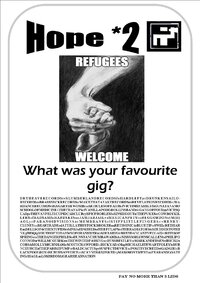