The VIKING MOSES was initiated by Southern Missourian Brendon Massei in 2003. The band has a dynamic, rotating cast of both established and obscure musicians worldwide, and is currently based in Northern Appalachia (USA).

More straight forward rock/soul than weird/folk as most of their contemporaries seem to be marketed, Viking Moses’ recordings are very accessible in convention, though live shows normally tend to have an unconventional approach, being hosted in unorthodox venues, often having assembled bands night-of, using members of support bands or strangers in the audience. Both aspects are delivered with utmost soul, passion, and humility, and always offer fans and strangers an experience which is unique and often contrary to expectation.

Viking Moses has been finding very fair attention since 2004, thanks to Devendra Banhart's "Golden Apples..." compilation and good words, followed by a signing by Alan McGee (Creation Records founder, and manager of Oasis, Jesus & Mary Chain, Primal Scream, Teenage Fanclub, Mogwai, Libertines, etc.) which has found Viking Moses high acclaim in UK and Europe, and kept them heavily active in that part of the world these past few years. 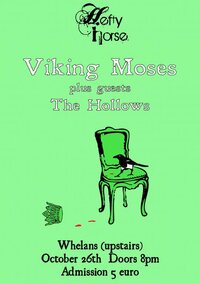 bump. this is happening this wednesday. really excited about this, Viking Moses is fantastic and a lovely guy so please try get down and check him out, you won't be dissapointed

This be cancelled folks.

On the plus side, I don't need to play guitar with my hand in a splint! Again.