There were 19 recommendations made relating to Ireland’s restrictive abortion laws.

Of those, one was accepted by Ireland: a recommendation by Switzerland that the government engage with all the relevant stakeholders in determining whether the legal framework surrounding abortion could be broadened.

The rest were deferred for study, with the government committing to providing a full report on how they might be implemented by September of this year.

This is in contrast to 2011, where Ireland rejected all recommendations on easing abortion laws.

Mark Kelly, CEO of the Irish Council for Civil Liberties, said that the government’s taking onboard of the criticism from other countries surrounding abortion represented a “sea change”.

“The ICCL notes that there has been a sea change in the Government’s attitude to criticism of our highly-restrictive abortion regime since Ireland last appeared before the UN Human Rights Council in 2011,” he said.
Click to expand...

That must be tough reading for Kenny, the government in waiting surges while the 'government' drops in popularity. Kenny can't have long left now and he's no one to blame but himself, the urge to be the first FGer to return the party to government took precedent over all else. Fianna Fails strategy is working a treat.

WTF is wrong with people going back to Fianna Fail. We'll never learn. 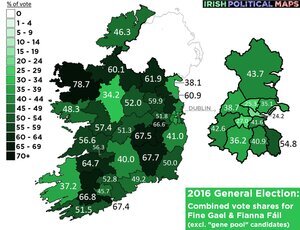 Any Dublin North Central voters? Have a pat on the back.

She's back in business. Looking at their accounts for 2014 (the latest I could find) she can expect to be earning 80-90k, this not including pension contributions

Not too shabby at all, well played Averil.

She's back in business. Looking at their accounts for 2014 (the latest I could find) she can expect to be earning 80-90k, this not including pension contributions

Not too shabby at all, well played Averil.
Click to expand...

you missed a "wheeze" joke somewhere...

€95k according to her chat with moncrieff today but she has "replaced two people".

Must listen back to that later. Replaced two people sounds... Spurious.
New posts