Hector Grey said:
I think I might have put Live In The City Of Light in my top ten. Fingers crossed.
Click to expand...

Worth it for the first 5 seconds of Dreams alone.

A girl I used to go out with in the 80s had this record and it was nice to listen to on her stereo. This music was almost too big and popular for me to even think of it AS music. It's just THERE. A few years ago at about 4 in the morning I just bought it on iTunes. Just now I've realised I only ever got about 6 songs in....

I listen to this album regularly and have done for as long as I remember.

There's not many albums I can say that about.

I love the bit where he loses control in Ghostdancing.

Anyway. Rumours. yeah it's great. It's kinda like Citizen Kane. What can we add to the discussion that hasn't been said a million times? Only personal experience, and like most it was just there, all the fucking time, when I was growing up. It came out in 77. 77, for me, is one of seminal years in music. But not cos of Rumours.

So, while punk and new wave was on the, FM radio soft rock was still huge. It feels like separate sides of the same coin. How can you love both?

I suppose at the end it's the quality of the songwriting. Having said that I can't stand Songbird. Skip that shit. I'm not a huge fan of post-Chickenshack McVie.

I never would have thought deeply about this record, but when I saw it here I felt conflicted. I want to say MOR, big money, bland pop shite. A album that has no depth, really. All cocaine surface.Maybe the Chain hints at something dark beneath the surface. But it isn't, is it? However, the bravest thing about this record is that it's completely americanified, and yet the spelled Rumours the correct way. Now, that's punk rock. Learn to spell, fuckers.

In conclusion. I don't really know.

I know the hits (who doesn't) but never heard the full album. 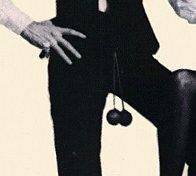 The actual sound if this record is one of the great wonders of audio. I can't think of many records that can compare from a purely production sense. I can literally feel the sound waves caressing my eardrums when I listen to it.

I'm not looking forward to this!

i listened to this loads as a teenager, and every now and again still

stories about stevie nicks being a knob sort of ruined fleetwood mac for me though..that and 'big love'

nooly said:
i listened to this loads as a teenager, and every now and again still

stories about stevie nicks being a knob sort of ruined fleetwood mac for me though..that and 'big love'
Click to expand...

all rumours @nooly (BOOM - see what I did there).

Stevie Nicks is the best (and arguably, only good) thing about Fleetwood Mac, IMO

i probably just listened to the album too much and got sick of it, really

Album of the Week #6 – Buckingham Nicks

Not a fan of this record, but the acoustic version of Big Love is outstanding..one for the "stupidly good guitar playing" thread

This isn't much good at all! I thought it was a lot better


GARYXKNIFEDX said:
A one song record,yeah,that one.
Click to expand...

Agreed, Dreams is the only tune that has anything going for it. Good old Stevie

johnnystress said:
Not a fan of this record, but the acoustic version of Big Love is outstanding..one for the "stupidly good guitar playing" thread

I love the original. When it came out, it made me feel weird. Like Stewpot's girlfriend or the blonde one from Dungeons and Dragons. It hinted that there was more to the world out there.

I heard tell that Lindsey wasn't talking to Stevie at the time, so the sex noises at the end are him, and his own voice sped up. I listened to it to confirm this, but the jury's out. I wouldn't put it past Buckingham to be having sex with himself.

nooly said:
i probably just listened to the album too much and got sick of it, really

Album of the Week #6 – Buckingham Nicks
Click to expand...

that buckingham nicks album is incredible

Lindsey is a girl's name. Just thought I'd mention that.

johnnystress said:
Lindsey is a girl's name. Just thought I'd mention that.
Click to expand...

and Buckingham is a brit's name