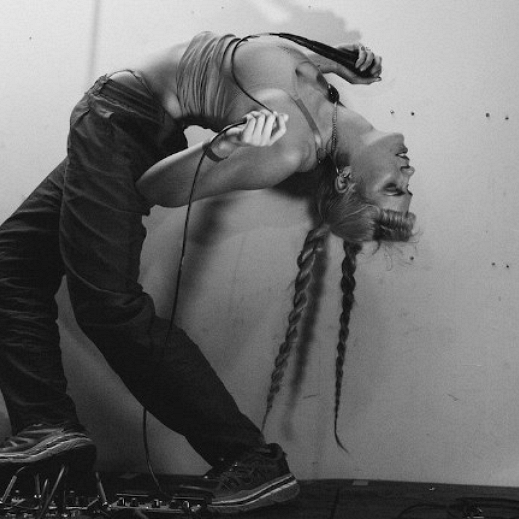 ‘IRISIRI’, Eartheater's third full-length record (out now on PAN), lays out a shifting network of abstract song craft, laced with sudden structural upheavals and collisions of mutated tropes from numerous sonic vocabularies. Modular synth staccato plucks hammer out in arrhythmic spirals over a carefully muzzled grid of pumping kicks - unleashed in unpredictable disruptions. Technoid stabs mingle with crushed black metal. An icy OS reads poetry against a bed of granular synth swells. Drewchin's sirening whistle-tone vocals drape over relentless live harp arpeggios. Drewchin's lyrics, strewn with flourishes of wordplay and symbolism, explore themes of her autodidactic experience - playing with the tutelage of the ‘pupil’ within the ‘iris' mirrored in the palindrome IRISIRI. Eartheater confounds expectations of structure and resolution before deciding to thread in a sugary melody that snaps us back into some conception, however hazy, of pop songwriting.


Drewchin performs and collaborates with art duo and close friends FLUCT. In February 2017, she starred in Raul de Nieves and Colin Self’s opera The Fool at the Kitchen. In April 2017, featured on two tracks from Show Me The Body’s Corpus I mixtape alongside Denzel Curry and Moor Mother. She’s currently composing work for the contemporary chamber orchestra, Alarm Will Sound, that will debut in May 2018. Her new live set sees her accompanied by the concert harpist Marilu Donivan.

"In Eartheater’s burgeoning musical world, women don’t need to fold their voices in service of beauty. They are free to make a ruckus, to sound monstrous, to gnash their teeth at anyone who would pen them in." - Pitchfork

"The risks taken here make it Eartheater's most striking full-length. In the album's endless subversions and contradictions, Drewchin occasionally hits on something profound, like sepulchral atmospheres, or the way her vocals run circles around the harp strums. Her music can feel frustratingly fragmented one second and suddenly coalesce into something brilliant the next." — Resident Advisor

“All artistic gestures feel connected in her world: music, dance, poetry, film, stripped of conceptual baggage and made accessible, full of feeling and expression built on a pounding intellect." – The Wire

Born in Kiev, Ukraine and reared in Baltimore, Maryland, Natalia Beylis now lives in a farmhouse in the middle of a woodland in Leitrim, Ireland where she forges compositions built upon the noises that emerge from the deep dark thicket surrounding her home. Beylis layers seemingly incongruous sounds atop of each other to spawn strange juxtapositions and garbled parallels in her work. Her solo releases range from out-of-tune piano compositions & improvisations to recordings created from spliced cassette tapes gathered throughout her life. In her live performances, Beylis focuses on the symbiosis of the sounds that she is producing and the particular physical space into which those sounds emanate. She often sets up live sound stations away from the stage so that the audience finds themselves encircled within the performance, dissolving the traditional directional expectations.

Beylis is the founding member of Woven Skull, a group that uses minimal instrumentation and improvisation to teeter on the brink of total sonic meltdown creating engulfing, raw primal drones and damaged rock manoeuvres; the result of which has often been described as the traditional music of a self-imagined land. Beylis also plays in Divil A' Bit, an ensemble that records under canal bridges, within sunken caves and inside megalithic tombs and she co-runs the improvised free noise collective, Three Eyed Makara with Willie Stewart. She has done collaborations and improvisational performances with Agathe Max, Aine O'Dwyer, Tor Invocation Band and United Bible Studies amongst others.

Her solo live set on this evening will be "whoosh whoosh....electric piano in stereo" played upon an Elettronica Ancona - Diamond Model through two Fender amps.