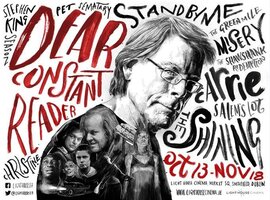 For five decades, Stephen King has been the untouchable master of horror fiction and his books have been revered by millions all around the world. The works of Stephen King carry in them an intelligent soul and an empathetic heart that draws a reader in like a hug, only to tear their hearts apart when inevitably, things turn gravely wrong.

In his introductions, Stephen King traditionally addresses his legions of fans as “Constant Reader”, folks he considers to be accustomed to his work and the style of his writing. His introductions are eloquent, thoughtful and friendly – as if addressing a group of friends eager to know more.

Throughout October and November we are celebrating the stories of Stephen King in a season entitled Dear Constant Reader, featuring a selection of some of the adaptations of his work throughout the years.

So join us, Constant Reader, as we spend the Halloween season in the company of some of the greatest pieces of cinema of all time, all from the mind of Stephen King.

One of King’s most successful and admired adaptations, Misery is the second of King’s books to be directed by Rob Reiner. A brilliant chamber piece and a fascinating and paranoid insight into the horror of fandom. Kathy Bates deservedly won an Academy Away for her portrayal of the Florence Nightingale from hell!

When a mysterious, murderous fog descends upon a rural community the frightened denizens of the town are forced to fend off an advancing horde of murderous monsters. Director Frank Darabont originally wanted to film The Mist in black and white, but bowed to studio demands for colour. He maintained his vision during production, filming as if it were B&W. We present The Mist as Darabont intended, in eerie monochrome.

Hollywood Babylon Dublin’s Midnight Movie Film Club is dedicated to your favourite ‘disreputable’ movies. Roughly speaking - movies best seen late at night, in great company and with beer (or a bespoke, appropriately monikered cocktail). Featuring a pre-show of the weirdest clips and trailers from the depths of your VHS nightmares.

We’re celebrating the late, great Tobe Hooper with a rare screening of his made-for-TV but nonetheless hugely cinematic adaptation of Salem’s Lot. Tying two beloved strands of genre lore – the haunted house and the vampire – Salem’s Lot is a marvellous exploration of dread and features some of the most memorable horror sequences in cinema history. You’ll wish the mysterious Mr. Barlow remained a mystery forever.

Louis Creed gets a lot more than he bargained for when he discovers a mythical cemetery behind his house that is rumoured to have the power to bring the dead back to life. Mary Lambert ably plays with some of our deepest fears in her classic big-screen adaptation of one of Stephen King’s most enduring novels about grief and coming to terms with the fact that “sometimes dead is better…”

When an awkward teenage boy begins to fix up an old Plymouth Fury, his relationship with his beloved car brings about some altogether unpleasant changes. John Carpenter brings his own brand of mayhem (and a superb soundtrack) to Stephen King’s horror tale of toxic masculinity and misplaced sexual frustration.

As is tradition at Cinema Book Club, we are reading a Stephen King book during the witching month! This year we have chosen his first ever published novel, Carrie. A seminal 20th century work that while bursting with empathy and tenderness for its heroine, is not afraid to venture into the dark heart of the worst of human nature – through the eyes of a social outcast in a 1970’s high school. Brian De Palma directs Sissy Spacek in this stylish, terrifying and hugely influential horror classic.

It wouldn’t be Halloween at Light House without a screening of Stanley Kubrick’s The Shining. Though notoriously loathed by the author himself, Kubrick’s admittedly very different take on the source material has resonated with audiences for years. With its bold visual design and its masterful soundscapes, this is a must for the big screen.

The Shining is undoubtedly one of the most intriguing and mysterious horror films of all time.

You might need to bring tissues for this one, as we present Frank Darabont’s exquisite adaptation of King’s tragic supernatural tale. This Death Row story is told through the eyes of a prison guard who forms a bond with a very special prisoner, John Coffey an innocent gentle giant who is preparing himself for his final walk down “the green mile”. An absolute classic.

Comfortably sitting atop all-time best of film lists, The Shawshank Redemption is one of the world’s most beloved films. Based upon a short but effective novella, the film follows the journey of Andy Dufresne, a fish out of water in the prison system, as seen through the eyes of the prison “fixer”, Red. One of cinemas most beautiful portrayals of friendship and enduring hope. Graced with the cinematography of Roger Deakins and a rousing score from Thomas Newman, The Shawshank Redemption never ceases to tug the heartstrings.

Rob Reiner directs what will always be the definitive depiction of coming-of-age friendship overcoming the worst of circumstances. A group of young boys go on an adventure on the outskirts of their small town to uncover a dead body that is rumoured to have been found in the woods. A respectful and uncondescending look at the period of time where young boys grow to be men. With an outstanding cast and a brilliant rock n’ roll soundtrack, even without the horror, this adaptation gets to the heart of Stephen King, at its finest.