For our third show in October, we have Toronto's CREEPING NOBODIES, Chicago's ANNI ROSSI and Dublin's THREAD PULLS.

Inspired by such bands as The Ex, Pere Ubu, and The Fall, The Creeping Nobodies seek to produce challenging music and are never afraid to explore new territory or re-invent themselves.During a live performance, listeners can expect to witness a propulsive, piercingly loud, fast and heavy song in the vein of the Dog Faced Hermans transition into a droning Vashti Bunyan meets Neubauten dirge, the effect of which may be simultaneously jarring and delightful

Anni Rossi has been working with Steve Albini on her debut album proper, slated for release on 4AD in 2009.Having been classically trained from a young age, Anni is a most accomplished multi-instrumentalist and as you’ll hear, it’s the viola that forms the centrepiece to her music.She's loved by other artists like Electrelane and The Ting Tings, with whom she's toured Europe and the States.

Opening up the night are Dublin's Thread Pulls, who have moved away from their original noise-rock/no wave-inspired beginnings toward a more upbeat post-punk sound.

Hope to see you there...

Propelled by a whirlwind tour of Europe in Fall 2007 and the release of two recordings on Sweden's Deleted Art and Italy's From Scratch respectively, Toronto's The Creeping Nobodies are again venturing out beyond the pale ice of Toronto toward the greens, greys and browns of Ireland, England, and Scotland.

So, who is this band? Well, many believe The Creeping Nobodies' music resists easy categorization… really, people just don't know what to make of it! But, if you need to put the pigeon in a hole, let it be known that they count Deleted Art labelmates Indian Jewelry and These Are Powers as kindred souls, are known to party with Montreal's Aids Wolf and drool at the altar of England's The Country Teasers/The Rebel. On tour they usually listen to the usual silly stuff like tropicalia, africalia, Alan Lomax jams, the "folk genre," sick classic rock and…the Ex?

Basic description wise, it's The Rock Line-Up of drums, guitar, bass and keyboards, but… there's lots of switching of instruments and experiments with bells, recorders, sheet metal, broken glass, plastic bags, trombone, violin, oscillators and deep delays. Add to that a super propulsive and erratic rhythm section and dark, brooding, melodic, but also thoroughly deadpan female vocals, and that's pretty much how they sound.

"This fall, the CREEPING NOBODIES will be releasing a much-anticipated split 7" with Brooklyn's THESE ARE POWERS (ex LIARS) on the label armyofbadluck run by Joshua Fauver of DEERHUNTER."

The band will have copies for sale on this tour...

A new signing to 4ad and whirlwind of energy, Anni Rossi is a startlingly fresh musician from Illinois who has been leaving audiences agog with her unique blend of classical virtuosity, ramshackle percussion and vocal acrobatics. Blessed with a distinctive voice that leaps effortlessly across registers, she plays viola simultaneously, plucking and bowing virtuoso accompaniments as she sings. She has been caterwauling and foot stompin' her way into audiences' hearts across Europe ever since Four Tet spotted her and got her invited to perform at London's Homefires Festival in 2005.

Her songs are alive with possibility and she has that Greenwich Village class via East European barn dance mixed with unkempt singer/songwriter allure all in bundles. Like Beirut, Final Fantasy or Karen Dalton she seems to have come from nowhere and hit upon a sound that is idiosyncratic, uncontrived and wholly adorable. Where ever she plays audiences go crazy for her coffee hit songs.
Anni Rossi's debut EP on 4ad is released in October and follows a sold out 7" on Too Pure. 'Afton' fleshes out her sound with clarinet, hand percussion, double bass and lush string arrangements. Somehow her songs manage to capture the vitality and abandon of her live shows as she pushes her voice and viola to the limit. Uplifting, joyous and totally unique. 4ad release her debut album in early 2009.

"The magic of local singer/songwriter Rollin Hunt is how he works with what he's got. Watching him play, backed by his ramshackle band, you sense the chasm between the pop songs he dreams and his delivery -- and his willingness to broach the space regardless of how awkward it may be -- is a winning proposition. Where Hunt arrives with his songs seems like a wholly earnest accident; his voice is pubescent and unstable, but he manages to eke out some soul, despite a slight speech impediment. Stylistically, he hews to classic '60 pop form -- as if someone was trying to imitate The Shangri-La's or The Ronettes but only knew them from a thirdhand description -- it's all unearthly shoo-be-do, horns and melancholy. Except the songs aren't about love, they're hallucinatory narratives about watching your neighbors make out in their window, distributing a pamphlet about yourself so you can be understood, or antelopes. Hunt has only played a handful of shows, but he's already on his way to becoming a local legend."
– Jessica Hopper. Chicago Tribune. April 13th, 2007. ©2007 Chicago Tribune. 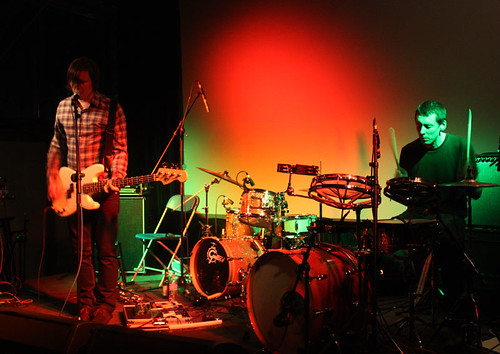 Thread Pulls current releases are the mini-album series "Fluorescent 1, 2 and 3" on their label Ninepoint records. Limited to 100 copies, each package contains an individual artwork by Garrett Phelan. Tracks from Fluorescent 3 were remixed/remade by David Donohoe and released in June as the album-length "Moonless and Crowblack". There are only 50 hand-made copies of this release, which comes in custom made packaging with 2 large-format lithographic posters. Thread Pulls became the first (and so far, only) Irish band to be invited to play at the All Tomorrow's Parties festival.

After releasing 4 eps on 9-pt as a drum-bass-guitar three piece, they've stripped down to the duo of Gavin Duffy and Peter Maybury, and they've moved away from their original noise-rock/no wave-inspired beginnings toward a more upbeat post-punk sound.

and there is also a limerick date on Wednesday night for Creeping Nobodies, Underground at Baker Place.
S

Looking forward to seeing them on Friday in Cork, should be good buzz.

Anyone know who's playing with them at it?

oh....does anyone know whereabouts the whiskey is?? Gotta find where it is before i head up!


Anarcho Munk said:
oh....does anyone know whereabouts the whiskey is?? Gotta find where it is before i head up!
Click to expand...

it's one or two doors down from where the Lobby used to be...was it called Fx or Phoneix or something like that???? The cork posters here should know.

from bus station, walk down parnell street
cross the bridge.
on the right theres three bars, one is the whiskey(on union quay).

if you know where city hall is, the whiskey is across the road from there

So tis on the north side of the city then boss? And as ya face out up towards the north (from the bus station) it'd be on the right hand side of the northside?

(sorry if that doesn't make much sense!)

no its on the southside
turn your back to the north side and walk south down parnell street and cross the bridge
cant miss it.only 3min walk away

creeps were great in limerick tonight.
you'd be a fool not to see them in your town...


righteous harmony said:
creeps were great in limerick tonight.
you'd be a fool not to see them in your town...
Click to expand...

I echo the sentiments of Righteous Harmony on this one - really good!
S

“Our space is a basement in a detached home in downtown Toronto. It is an older house from around 1917. Some of us used to live here for a time, but its current occupants are other artists, musicians and other folks - some of who are friends and peers. The basement was renovated a few years back when Chuck lived there, so soundproofing, better walls and insulation were installed. The basement consists of a main rehearsal room with soundproofed doors and walls and ceiling – it’s a modestly sized room painted a deep red with a small chalk board, many instruments and amplifiers, two couches, exposed beams in the ceiling, Christmas lights, some drawers and bins for storage, and a four-track recorder. The floor is wood-stained plywood that has been mostly covered with removable rugs....
Click to expand...

The gig last night in Cork was pretty deadly. They were selling these little mini cd's with a cover of a Silver Apples song, I meant to get one but it completly slipped my mind by the end of the night!
I really want one!