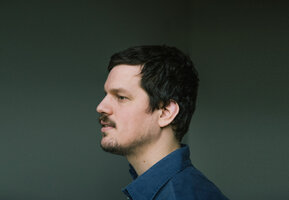 When it came to the mechanics of capturing the raw aftermath of this brief romance, Christof van der Ven’s instinct was to be as unedited as possible.

Written and recorded over the three month period immediately following the end of a brief and intense romance, these tracks stand as an unfiltered overspill of emotions in the aftermath.

Holland born van der Ven captures the subtle, soft textures of recent memories, using the album as a vehicle to examine his confusion and frustration around this evolving heartache, as well as the pain and humour that comes from shared vulnerability, and the desperation that comes with recognising that you’ve found something special. It meant a less meticulous process than his previous releases, but one that forces an unravelling that is as instinctive as it is important: “I got a lot of comfort out of reading and the urge to just make the record,” he explains. “Some of the album is more intricate and complicated, some of it is really quite simple. I haven’t let myself do that before.”

Turning to more expansive and experimental instrumentation for his second record, Christof manages to harness a tentative optimism both sonically and lyrically throughout the ten tracks, guiding us through snapshots of his emotional untethering without malice or regret. Working through multiple perspectives, ‘You Were The Place’ immortalises collective anxieties around human connection, making it one of the most comforting and reassuring records about sudden solitude in recent years.

The artwork for the album was created by artist Kathleen Lolley, whose work ‘Wild Flowers’ sums up this lonesome territory with a beautiful, poetic proclivity: "This about shedding masks and being one’s self,” she explains. “Letting growth happen, even if it’s painful." In essence, this is an album about loss, but one that will ultimately make those feeling adrift and upside down a little more level-headed, a little more understood and a little more listened to.

Christof is now based in London, splitting his time between working as a chef, playing as a touring musician with Bear's Den as well as releasing and touring his own music with the help of a strong friendship group of fellow musicians and artists.

In support of the release of ‘You Were The Place’, Christof van der Ven will be playing headline shows this autumn in The Netherlands, Germany, Belgium and the UK.