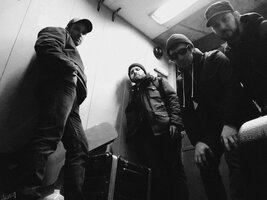 As a band redefined by the loss of bassist Caleb Scofield, Cave In have been slowly teasing their continued identity as one of post-hardcore’s most resilient contingents. With the June 7th release of their Final Transmission LP rapidly approaching, the band has released yet another glimpse of the future’s promise, via the new track “Shake My Blood."

With nearly seven years elapsed since their last album, the members of Cave In convened at their rehearsal space in February 2018 in hopes of capturing lightning in a bottle. After a weekend spent laying the groundwork for new songs to come, Caleb Scofield got in his truck and drove home to New Hampshire. It was the last time his bandmates would ever see him. In an instant, a light had gone out in the world—a monstrous bass tone, a feral roar, a friend and father. While Caleb may not be of this world any longer, his fingerprints can be seen and felt all over Final Transmission. Along with appearing on the album’s opening track an iPhone voice memo, he plays bass on six of the album’s remaining eight songs, and guitar on the other two.

Originally intended as demos, Final Transmission was brought to fruition by a band in need of catharsis, then mixed by Andrew Schneider and mastered by James Plotkin. Even a cursory listen of Final Transmission will offer glimpses of past Cave In eras, from the scintillating space rock of their 2000 breakthrough opus Jupiter to the ripping metal melodies of White Silence. All told, it’s a direction that was largely spearheaded by Caleb Scolfield’s musical legacy.

Lightning Bolt - Blow To The Head