He wears a suit and tie for bedtime stories?

There is a cave.
A cave that is home to a creature.
A creature that never leaves its cave…
Because of a wolf.

The wolf tries everything to get the creature to leave the cave, to no avail. But what will happen when he's finally successful? This is a laugh-out-loud story with a BIG surprise!
Click to expand...

egg_ said:
He wears a suit and tie for bedtime stories?
Click to expand...

He probably wears them as pyjamas

egg_ said:
He wears a suit and tie for bedtime stories?
Click to expand...

Props to Pete for explaining his reference, seeing as I almost never get references

BBC Political Editor Laura Kuenssberg got called out yesterday for revealing the identity of the guy who confronted Boris Johnson at the hospital and revealing that he is a Labour activist. Interesting because she considered sympathetic to the Tories in some circles, and has lots of followers who don't like Labour and the dude reportedly got piled on by right wing trolls. The right then reported that LK got piled on by left wing trolls.

Turns out the other lad in the pic is a Tory activist who was sacked from the Times for lying and conspired to have a journalist beaten up among other things.

A long read for the weekend.

Neither Dominic Cummings nor Michael Gove can get Boris Johnson out of this hole. I am sure they will be happy for him to shoulder the fall out though.

Inside No 10 a split and bruised government is divided over how to escape the quagmire it has marched into. By now Boris Johnson and his team had intended to be in the middle of an election campaign, giving him a new mandate for Brexit. Their mismanagement of parliament, party and the public has stymied all that. The government has only six weeks left before its own deadline to leave the EU, do or die. It is struggling not to die.

‘They are riven,” says a senior Tory. “They realise the first strategy failed. Now there are two schools of thought competing in No 10. The first faction is determined to double down on every legal and political trick, however constitutionally questionable. The second thinks the game is up, and they have to get a deal.”

The diehards are being led by Dominic Cummings and Dominic Raab and the pragmatists by Michael Gove. “Boris is listening to both. He’s undecided which way to go.”

Cummings and Raab think their essential strategy is still a winning one. They know all campaigns stumble and their goal remains unchanged. Keep positioning Johnson as the fearless defender of Brexit, the man willing to break all rules and conventions in its cause, and he will swing the Brexit voters of the country behind him.

Proroguing parliament, being booed in Luxembourg, fighting for the prime minister’s freedom of action in the Supreme Court; in the diehards’ view these are not embarrassments but vital signals to Brexiteer electors that Johnson is of the true faith. They are willing to gamble that constitutional niceties, agonisingly important to voters like me, look bafflingly irrelevant to voters in Middlesbrough or Grimsby who might watch television news for ten minutes a week and just want Brexit done. That is why they are hunting for legal loopholes. And they are prepared to push Johnson’s defiance much further.

The Cummings team are letting rumours swirl that Johnson might refuse to implement the extension law at all if he has no deal in place by October 19, leaving the Supreme Court to order someone else in his government to request it instead. That would allow Johnson to keep his promise of never asking for an extension. It would keep him pure.

If we are indeed still in the EU at the end of October and Johnson has refused to concede or co-operate in any way, he can weaponise that by telling the electorate that the malign forces of courts and parliament have boxed him in, and that only the people can set him free. His appeal in the next election, Cummings believes, has to be that he is prepared to fight every kind of establishment — legal, parliamentary and European — in the Brexit cause.

Inside the pragmatists’ team, led by Gove, there is nervousness about pinning the government’s every hope of survival on a policy of relentless defiance. As one anxious insider told me, after October the public might well see a trapped Johnson as a weak and diminished figure rather than a noble one. “If we don’t leave by October 31 we get a re-run of Theresa May’s problem — a drop in the Tory vote and a big rise in the Brexit one. The only way to be sure we leave is to get a deal, and the quicker the better.”

There has been a new and intense focus from the Gove team in the last week on finding rapid solutions to all the familiar and impossible obstacles; freeing the UK from European regulations and control, while avoiding hard borders in Ireland and keeping the Union together. It is, to borrow a phrase, another of Boris Johnson’s square circles, and so far the government hasn’t discovered how to rewrite the rules of geometry.

Under orders, Whitehall is frantically scrabbling around for proposals but as one insider pointed out, if Theresa May, a dreary but diligent prime minister, couldn’t find those solutions over years, how likely is it they can be unearthed in days? Even insiders place the chances of a deal by the October deadline at 25 per cent.

The pragmatists’ preferred deal is to pass the withdrawal agreement, including a form of Northern Ireland only backstop, with a whole muddle of untried ways to avoid a hard border and prevent smuggling. The rest of the UK would leave the customs union and the single market, and negotiate with the EU for Canada-style free trade. This is a hard Brexit. The key problem, even supposing Europe were to bend its red lines by agreeing it, is that this too is unlikely to pass the Commons.

Lacking a majority, Johnson would need rebel Labour MPs behind him, but they wouldn’t back a hard Brexit. Tory rebels would be torn; some at least would abstain. The DUP could well balk at seeing its own red line trampled. Some ERG hardliners now oppose anything but no deal. The risk Johnson runs in putting forward a deal which might fail is both that he looks like a loser and that the purity of his message — I will deliver a good deal or no deal — is lost.

Every option for Johnson now looks hazardous. Even supposing the public back him on either defiance or a deal, he can’t choose to go to the country; the power to decide that is now in Labour’s hands. Labour might choose, says one senior Tory, to keep him in office but not in power for weeks to come, dangling and looking weaker by the day.

The greatest criticism of him is said to be coming from the election strategist who won so many victories for the Tories and Johnson over the past decade. A furious Sir Lynton Crosby is reported to be “out of the game” after losing the fight with Cummings for strategic control.

Crosby thinks that mimicking the Brexit Party will prove a terrible error, damaging the brand and losing vital seats which won’t be compensated for by northern gains. But if Britain is still in the EU come November, he believes the prime minister’s best hope is to avoid an election until Brexiteer anger dies down.

Whichever route Johnson chooses, this is now, as a former cabinet minister tells me, “a hell of a gamble” — with the party’s future, the country, our lives. But this is a gamble he wilfully constructed. He has always thought details didn’t matter and that vim and vigour were the answer to any problems; tough reality may be about to find him out.

therealjohnny said:
dangling and looking weaker by the day.
Click to expand... 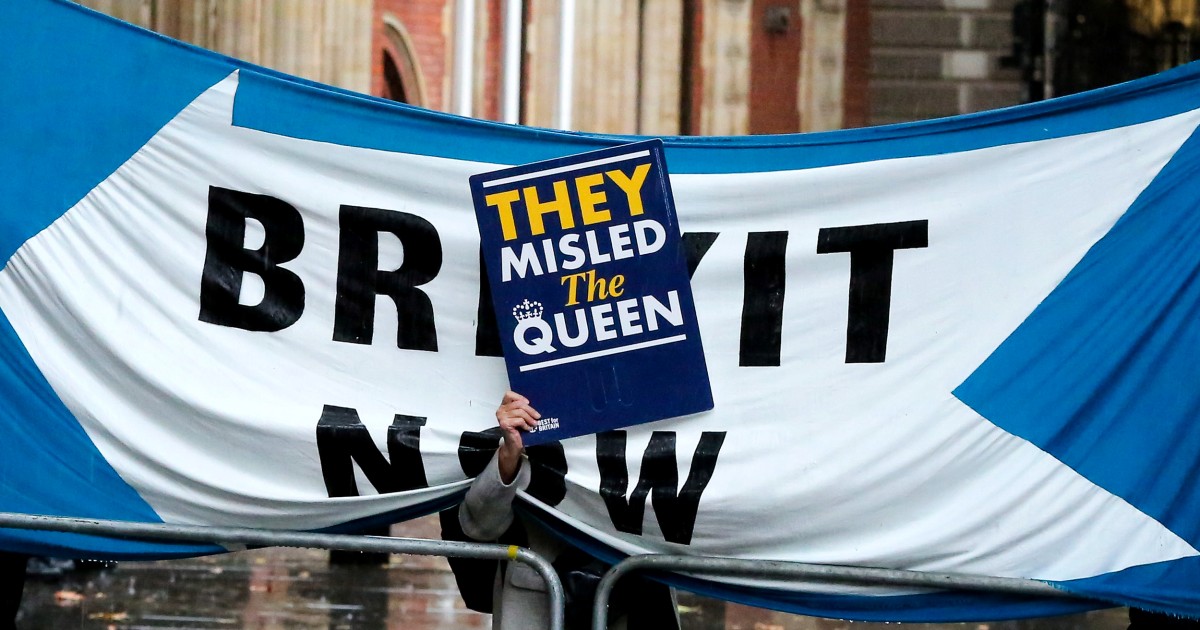 "The effect upon the fundamentals of our democracy was extreme," according to the court's president, Brenda Hale.

So...what does this actually mean? business as usual, nothing to see here, waffle waffle, lets get on with the task in hand?

therealjohnny said:
So...what does this actually mean? business as usual, nothing to see here, waffle waffle, lets get on with the task in hand?
Click to expand...

Boris in prison for Christmas

The Queen in prison for Christmas

therealjohnny said:
So...what does this actually mean? business as usual, nothing to see here, waffle waffle, lets get on with the task in hand?
Click to expand...

Parliament is not poruged and Johnson broke the law

The gift that keeps on giving.