I have a theory that it was Boris Johnson who came up with this Athena reference rather than Varadkar. I knew about that Jeremy Vine anecdote and I don't for a minute believe Johnson is a bumbling fool - he knows what he's doing and he's dangerous.

I think Johnson is looking for a way to get a Northern Ireland-only backstop.

He's thrashed the government, parliament etc and it's meant the political stalemate Theresa May faced has been turned in to a soup.
He wants to return in mid-October, after the prorogued parliament, with a deal which will mean Northern Ireland effectively still being in the EU while the rest of the UK is out.
For Johnson - and the Conservatives - the big problem for the past couple of years has been the DUP. English nationalists generally don't care about Ireland. There are plenty who want to it to remain, but I believe the majority, if not vast majority, of English and Welsh people would prefer to be rid of Northern Ireland.
The UK government have already just shafted the DUP by bringing in abortion and same sex marriage in to Northern Ireland.
The DUP are lost without the Conservatives as neither Labour or the Lib Dems would go near them. Johnson sees this so he's cutting them loose.

Here's what I reckon (today!)...
The UK and the EU will come up with a deal which kind of keeps NI in the EU. NI will adhere to any EU rules around any physical goods. This deal will be very like what was originally offered to the UK, but they'll make it out that Johnson got concessions (around the €39 billion and stuff like that).
The DUP will be raging, but they won't be able to do much. In any of the marginal seats they won in 2017, they're toast. They've lost all credibility around being competent with the economy.
The Brexit Party will be shafted, because Johnson will tell them he's delivered Brexit and there's no need for them. The Brexit party have made a big error making this pitch to do a coalition with the Tories. Many Labour Leavers will immediately see a vote for Farage is a vote for more austerity and hyper-Thatcherism.
Johnson (and Cummings) are turning the Tories in to an English Nationalist party - so they'll lose seats in suburban areas, but they reckon they'll have a chance to gain in more working class, nationalist areas of England.
Johnson will return to Westminster in mid October with this cooked up deal and it'll give the MPs little choice. It forces them in to either revoking Article 50 or going with this deal. They (i.e. Labour) won't have time to pick it apart and establish a coherent opposition to it.
As for the Tories like Grieve and Letwin etc.
They'll be pointing at how Johnson has ruined Parliamentary conventions and ran roughshod with the law. However Johnson, with his Brexit deal, will respond with "yeah... but I've delivered Brexit, so all that was necessary and nobody really cares about politics". Although Johnson is behaving like a dictator and it's very wrong proroguing parliament as he's done, you do wonder... those politicians defending the status quo are also defending an institution that has is obscure and very distant from the voters. Brexit was as much a vote about a change in British politics as anything else. Leavers want to trash the system because they feel the system hasn't worked for them.

Then... Johnson will call an election and go around the country waving the Union Jack claiming he's lead the UK to independence. He'll claim he's done that Herculean task - and that he had to trash everything and was losing control... but it was good old Ireland (the Athena), who stopped him, made him see sense and come up with a deal (which is all bollox).

Anyway... that's what I think the Tory plan is. It makes me sick. It'll mean if he wins Britain turning in to a low-regulation, hyper-capitalist country where workers will be absolutely stuffed.

I say all this... but Johnson could be in prison by the weekend after next.

‘Northern Ireland Only’ backstop was the only ever workable deal as far as I could / can see.

ernesto said:
‘Northern Ireland Only’ backstop was the only ever workable deal as far as I could / can see.

You said it far more succinctly that I did!

Johnson always knew this but he couldn't be the Prime Minister who breaks up the United Kingdom (even though they're not).
The official name of the Tories is the Conservative and Unionist Party. It's his own party and the DUP who have been stopping this NI-only backstop - so he's thrashed them (like Hercules killing his kids before Athena stopped him doing more damage).

Here's the Dead Cat thing: Johnson and his dead cat

The dead cat thing is very like the kind of stuff you read in the IRA handbook.

the dead cat thing said:
Let's suppose you are losing an argument. The facts are overwhelmingly against you, and the more people focus on reality the worse it is for you and your case
Click to expand...

Erm ... if you're wrong, and you know it, then why the fuck are you arguing in the first place?
G

The dead cat thing is a way of trying to look clever by not saying cause a distraction.

Unfortunately,everyone who 8s fooled by it also looks stupid.


There's a conspiracy theory ( I suppose thats what it would be) that reality tv is just that distraction.

egg_ said:
Erm ... if you're wrong, and you know it, then why the fuck are you arguing in the first place?
Click to expand...

egg_ said:
Erm ... if you're wrong, and you know it, then why the fuck are you arguing in the first place?
Click to expand...

It's because these Eton boys treat Westminster as a personal debating club. Johnson has absolutely no morals or ideals. As Pete says, he just wants to win. He couldn't care less what happens to the country.

That and the massive short position his financial backers have taken.

I’ve seen every episode of Billions so I feel qualified to comment. 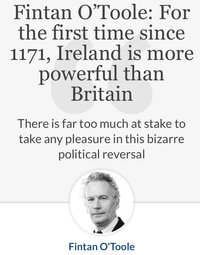 Who does Fintan think he’s fooling

He’s clearly having the time of his life

Today's press conference in Luxembourg with X Bettel but no B Johnson starts at 1:32

I know it's cool to hate on the Simpsons these days,but that's really unfair on Homer.
Last edited: Sep 16, 2019

Guardian says Johnson is humiliated, the Telegraph says he was ambushed.

billygannon said:
I don't for a minute believe Johnson is a bumbling fool - he knows what he's doing and he's dangerous.
...
I say all this... but Johnson could be in prison by the weekend after next.
Click to expand...

people do like to big up the notion that he's some master tactician with some cunning masterplan. either he is, or he's bumbling along with the one advantage he has being that people assume he's got some sort of masterplan.

Jo Swinson is the worst - disingenuous, snobby and completely out of her depth. The Lib Dems seem to be getting a huge push in the media at the moment (tv and radio seem to be giving them non stop promo) - probably due to her strategy of attacking Corbyn at every opportunity which the right wing press love. Awful politician, awful party.

Bernie Lomax said:
Jo Swinson is the worst - disingenuous, snobby and completely out of her depth. The Lib Dems seem to be getting a huge push in the media at the moment (tv and radio seem to be giving them non stop promo) - probably due to her strategy of attacking Corbyn at every opportunity which the right wing press love. Awful politician, awful party.
Click to expand...

I think your Labour bias may possibly, just a bit, be glaringly obvious

ernesto said:
I think your Labour bias may possibly, just a bit, be glaringly obvious
Click to expand...

That unfortunately doesn't take away from the Lib Dems being an awful party.