The Mail On Sunday take a little more of the fun out of life.

He is one of the art world’s most famous names – whose graffiti works sell for hundreds of thousands to fans including Brad Pitt and Angelina Jolie.
But for years the true identity of the artist Banksy has been a closely guarded secret, known to just a handful of friends.
Now a Mail on Sunday investigation has uncovered compelling evidence suggesting that the artist is former public schoolboy Robin Gunningham.
Enlarge 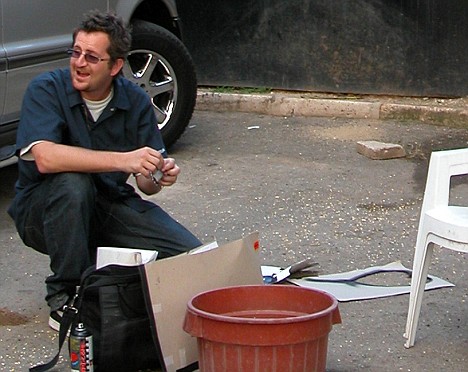 In the frame: The man in this photograph, taken in Jamaica four years ago, is believed to be Banksy 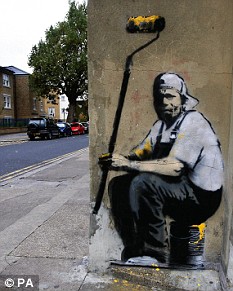 A Banksy artwork in Bethnal Green - a possible self-portrait?

The notion that Banksy is Gunningham, 34, who was educated at the £9,240-a-year Bristol Cathedral School, will shock the artist’s fans, fond of their hero’s ‘anti-establishment’ stance.
Banksy has become renowned for his use of stencils to spray illegal images on public walls. Some councils and businesses have begun to protect his creations and his works have been sold to celebrities, including Jolie and Pitt.
Rumours have persisted that the artist is called Robin Banks, that he is from Bristol, and that his parents think he is a painter and decorator.
The only concrete clue until now has been a photograph taken in Jamaica four years ago of a man with a bag of spray cans by his feet.
Gunningham’s former school pal Scott Nurse said: ‘He was one of three people in my year who were extremely talented at art. I am not at all surprised if he is Banksy.’

Records reveal Gunningham once lived with artist Luke Egan, who later exhibited with Banksy. Mr Egan initially denied knowing Gunningham but later admitted he had lived with him. 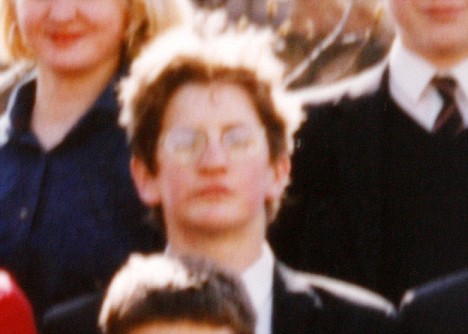 Mystery boy: Robin Gunningham in 1989 when he was a pupil at Bristol Cathedral School

Asked if he was saying Gunningham was not Banksy, Egan said: ‘Well, he wasn’t then.’
Around 2000, when Banksy moved to London, Gunningham relocated to a flat in Hackney. A number of Banksy’s most famous works have appeared nearby. At that time Gunningham lived with Jamie Eastman, who worked for the Hombre record label – which has used illustrations by Banksy.


People who know Gunningham are now unable to say what has become of him. His father Peter, who lives in Kingsdown, Bristol, denied that the man in the photograph was his son, and his mother Pamela was surprised by the picture, then denied she even had a son, let alone one called Robin.

Banksy’s publicist would neither confirm nor deny whether the artist was Robin Gunningham.
Click to expand...

I see your point, but most artists want to have their stuff seen.

The british media are obsessed with class

this was way better:

[/FONT] Here's a mystery for you. Renegade urban graffiti artist Banksy is clearly a guffhead of massive proportions, yet he's often feted as a genius straddling the bleeding edge of now. Why? Because his work looks dazzlingly clever to idiots. And apparently that'll do.
Banksy first became famous for his stencilled subversions of pop-culture images; one showed John Travolta and Samuel L Jackson in a famous pose from Pulp Fiction, with their guns replaced by bananas. What did it mean? Something to do with the glamourisation of violence, yeah? Never mind. It looked cool. Most importantly, it was accompanied by the name "BANKSY" in huge letters, so everyone knew who'd done it. This, of course, is the real message behind all of Banksy's work, despite any appearances to the contrary.
Take his political stuff. One featured that Vietnamese girl who had her clothes napalmed off. Ho-hum, a familiar image, you think. I'll just be on my way to my 9 to 5 desk job, mindless drone that I am. Then, with an astonished lurch, you notice sly, subversive genius Banksy has stencilled Mickey Mouse and Ronald McDonald either side of her.
Wham! The message hits you like a lead bus: America ... um ... war ... er ... Disney ... and stuff. Wow. In an instant, your worldview changes forever. Your eyes are opened. Staggering away, mind blown, you flick v-signs at a Burger King on the way home. Nice one Banksy! You've shown us the truth, yeah?
As if that wasn't irritating enough, Banksy's vague, pseudo-subversive preaching is often accompanied by a downright embarrassing hardnut swagger. His website is full of advice to other would-be graffiti bores, like: "be aware that going on a mission drunk out of your head will result in some truly spectacular artwork and at least one night in the cells". Woah, man - the cells!
He goes on to explain that "real villains" think graffiti is pointless - not because he wants you to agree with them, but because he wants you to know he's mates with a few tough-guy criminal types. Coz Banksy's an anarchalist what don't respect no law, innit?
One of his most imbecilic daubings depicts a monkey wearing a sandwich board with "lying to the police is never wrong" written on it. So presumably Ian Huntley was right then, Banksy? You absolute thundering backside.
Recently, our hero's made headlines by sneaking a dummy dressed in Guantánamo rags into Disneyland (once again fearlessly exposing Mickey Mouse's disgusting war criminal past), and defacing several hundred copies of Paris Hilton's new album (I haven't heard her CD, but I'm willing to bet it's far superior to Blur's godawful Think Tank, a useless bumdrizzle of an album, whose artwork was done by Banksy - presumably he spray-painted it on a brick and hurled it through EMI's window, yeah?).
Right now you can see some of Banksy's life-altering acts of genius for yourself at his LA exhibition Barely Legal (yeah? Yeah!), including a live elephant painted to blend in with some gaudy wallpaper. This apparently represents "the big issues some people choose to ignore" - ie pretty much anything from global poverty to Aids. But not, presumably, the fat-arsed, berk-pleasing rubbishness of Banksy. We're all keeping schtum about that one.
Click to expand...

Dutchy said:
this was way better:
Click to expand...

one of my favourite brooker pieces. spot on.

Dutchy said:
"be aware that going on a mission drunk out of your head will result in some truly spectacular artwork and at least one night in the cells".
Click to expand...

This is solid advice.
C

prefuse said:
The british media are obsessed with class
Click to expand...

Aren't the British obsessed with class?


Banksy is a full grown man who draws pictures on walls. People need to chill out about him.

Location
Up My Own Hole, getting browned off.

prefuse said:
The british media are obsessed with class
Click to expand...

It's be a miracle if he wasn't gay.

From reading the english music press for years it seems to be:

Working Class = Good (unless you're a chav)

Middle class = The worst. Seems to be used as an insult.

Upper class = Bad. but not as bad as middle class.

I remember reading something about Paul (grumpy bollox) Weller where he took great offence at being called middle class. He still considers himself to "working class" despite the fact that he's a multi millionaire and has barely worked a day job in his life. Hmmmmm

prefuse said:
From reading the english music press for years it seems to be:

Working Class = Good (unless you're a chav)

Middle class = The worst. Seems to be used as an insult.

Upper class = Bad. but not as bad as middle class.

I remember reading something about Paul (grumpy bollox) Weller where he took great offence at being called middle class. He still considers himself to "working class" despite the fact that he's a multi millionaire and has barely worked a day job in his life. Hmmmmm
Click to expand...

or the strokes who were great and wouldn't fall for the pitfalls of fame and fortune because they grew up in unbelievably rich familes. go them.

They don't mind if bands come from wealthy backgrounds...just as long as they're not british. The Strokes seemed almost exotic to the brit music press, probably because they all had weird names.

Being a middle class white boy is just not interesting. What's your spin?